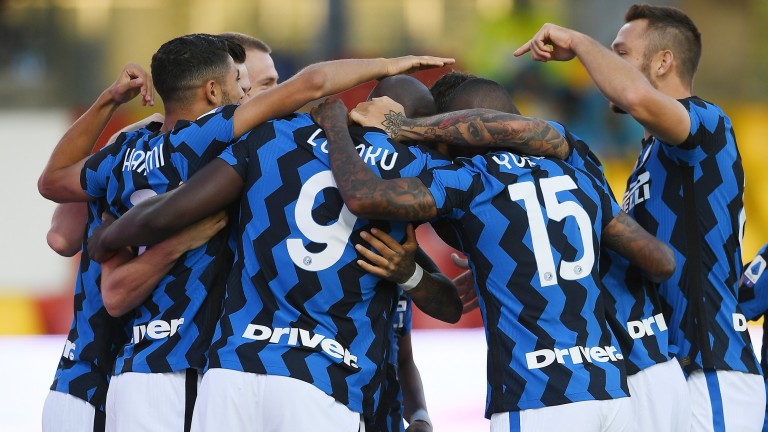 Best bets and analysis for this weekend's La Liga, Bundesliga, Serie A and Ligue 1 action.

Inter finished only one point behind champions Juventus last term but it is their rivals Milan who are the early pacesetters in Serie A this campaign with three wins on the spin.

Milan have also kept three successive clean sheets in that run but it is worth noting two of the sides they have beaten - Crotone and Spezia - were in Serie B last season and the other - Bologna - finished 12th in the top-flight standings.

And they could struggle to handle the step up in quality when they take on Inter, who have seven points from their three matches but have had a tougher run.

After wins against Fiorentina and Benevento, Inter took a point off top-four hopefuls Lazio in Rome and their fearsome front line should help them preserve their unbeaten start with victory in the Milan derby.

Lautaro Martinez and Romelu Lukaku have helped them net ten goals in their first three league matches of 2020-21 and Antonio Conte's side managed 81 goals in their 38 matches last season, finishing 16 points better off than Milan.

At odds-against, Inter look a good bet to take the spoils having won each of their last four meetings with Milan.

Hoffenheim suffered their first defeat of the new Bundesliga season to Eintracht Frankfurt before the international break but their recent performances suggest they can cause plenty of problems for Borussia Dortmund.

Sebastian Hoeness's men edged Cologne 3-2 before putting four past reigning champions Bayern Munich and with Andrej Kramaric in form, they are worth backing in the double chance market.

Dortmund showed defensive vulnerability in their last away league game, falling to a 2-0 defeat at Augsburg, who only just escaped relegation in 2019-20.

After four games and a fairly soft run of fixtures, Athletic Bilbao find themselves in the relegation zone in La Liga but their performances have arguably deserved better results and they can account for Levante on Sunday.

Levante have lost three of their opening four league games of the season, shipping eight goals in the process, and they struggled on the road last term.

The club from Valencia lost 12 of their 19 aways in 2019-20 and could come away from the San Mames empty-handied.

Although Bilbao have struggled for results but they were thoroughly dominant in their previous home contest with Cadiz, who won 1-0, winning the shot count 13-3 and seeing 73 per cent of the ball.

They also had more possession in their losses to Granada and Alaves and in a club friendly with Valladolid during the international break showed more signs of attacking intent in a 2-2 draw - back Bilbao to come out on top.