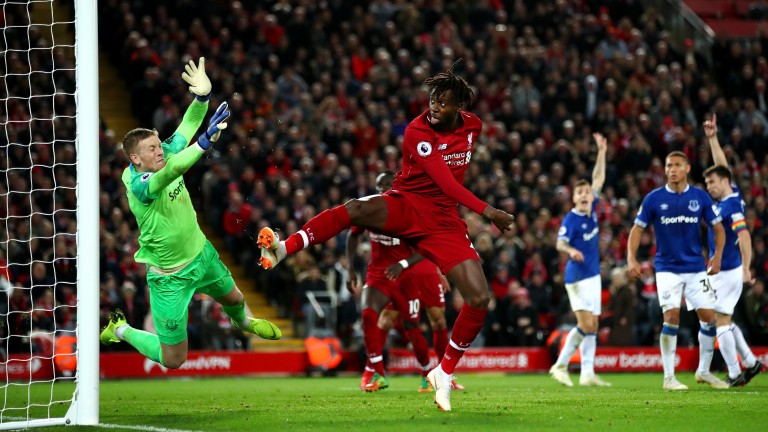 It was an unusual goal from an unlikely source but Liverpool won't care about that after substitute Divock Origi scored a freak injury-time winner to beat Everton 1-0 at Anfield and bring home a treble for favourite backers on Premier League's derby day.

Origi, whose last Liverpool goal was against West Ham in May 2017, spent last season on loan at Wolfsburg and was seemingly surplus to requirements, although he came up big for Jurgen Klopp's side, nodding in after Toffees keeper Jordan Pickford made a mess of a Virgil van Dijk shank which bobbled across the bar.

It was a vital moment to keep Liverpool two points off the Premier League title pace being set by Manchester City with the Reds 4-1 to be crowned champions.

If the 2-5 match favourites were far from convincing on Merseyside that was not the case in the capital as Arsenal and Chelsea ran out comfortable winners over Tottenham and Fulham in north and west London respectively.

Arsenal, 5-4 to finish in the Champions League qualification places, thumped Tottenham 4-2 at the Emirates to jump above their arch-rivals into the top four spots.

The Gunners came out all guns blazing, deservedly taking the lead through Pierre-Emerick Aubameyang's penalty only for Spurs to hit back, first with Eric Dier on target and then thanks to a Harry Kane spot-kick.

However, that first-half advantage was soon wiped out with Aubameyang, Alexandre Lacazette and Lucas Torreira finding ways past Hugo Lloris.

Aubameyang is the first Premier League player to hit ten goals this term and bet365 are 9-1 he reaches 30 this term.

Tottenham's misery was complete when Jan Vertonghen was sent off. Spurs are out to 4-9 to finish in the top four but 8-15 with bet365 to end the season above Arsenal.

Chelsea are 3-10 in the top-four market and 40-1 to win the Premier League following their 2-0 triumph over Fulham. Pedro broke the deadlock and Ruben Loftus-Cheek made the points safe.

Celtic claimed the first piece of major silverware in Scotland with a 1-0 Betfred Cup success over Aberdeen, however, they have lost top spot in the Ladbrokes Premiership after Rangers beat Hearts 2-1.

There were eight FA Cup second-round ties and a total of just ten goals with all of them finishing with under 2.5 goals. The big upset came at the County Ground where 7-1 Woking toppled Swindon.