Seagulls should have enough strength in depth to overcome Pompey test 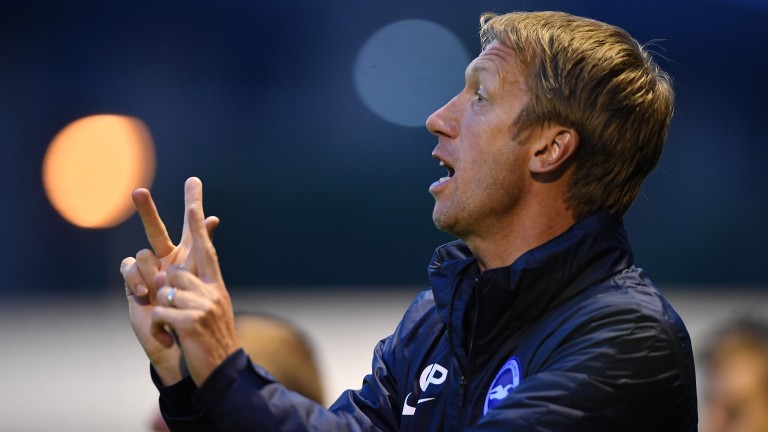 Free football tips, best bets and analysis for Brighton v Portsmouth in the EFL Cup second round on Thursday.

Portsmouth
New signing Michael Jacobs is in the squad but may start on the bench.

A hectic first-week schedule and their previous EFL Cup line-ups tell us Brighton will be a long way from full-strength against Portsmouth but Albion have a solid enough squad to win the game.

Graham Potter welcomes Sky Bet League One opposition in this second-round tie just three days after they entertained Chelsea in the Premier League and three days before they are at Newcastle.

Twelve months ago Brighton entered this competition at Bristol Rovers and Potter changed his entire starting line-up from the side they fielded against Southampton in the league a few days earlier.

Having seen Adam Lallana and Ben White pick up knocks in the 3-1 defeat against Chelsea and with players needing to be given time on the pitch, Potter will again make wholesale changes.

The layers are aware of that, hence seemingly generous quotes of 7-10 the top-flight outfit who looked pretty smart for long periods of their luckless loss to Chelsea. And it’s also worth noting that they won that match at Rovers last season, 2-1, a game they absolutely bossed.

This isn’t a competition that floats many boats in East Sussex – Brighton have reached the last 16 just once in the last 40 years. But they really should still be able to demonstrate superiority over third-tier adversaries and get to the last 32 this season.

It doesn’t look like it’s a fixture which will boast many goals – Albion fans are already sensing that a lack of firepower, if not addressed sharpish, could become a millstone, while Portsmouth were utterly aimless anywhere near the penalty box during their 0-0 draw with Shrewsbury at Fratton Park on Saturday. They have signed Michael Jacobs from Wigan in a bid to add some much-needed invention in the number ten role.

If Brighton do get up expect it to be in a low-scorer, so the Seagulls and under 3.5 goals might offer an alternative to anyone wanting to back them at odds-on to win in 90 minutes.

This is a difficult match for Portsmouth boss Kenny Jackett as well. Under massive pressure to get Pompey promoted after successive failed playoff bids, transfer movement has been thin on the ground and unconvincing efforts against Stevenage and the Shrews don't augur well.

He also has a Sunday trip to occupy his thoughts with his side heading off to Rochdale.

Portsmouth have drawn five of their last six matches.