Flapping Eagles 4-5 to go down after Stoke choke 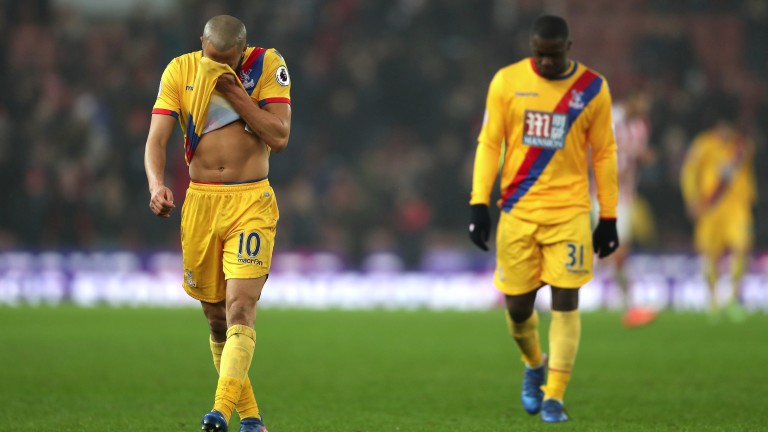 Crystal Palace trudge off the pitch after losing at Stoke
Mark Robinson
1 of 1
By Mark Langdon 7:55PM, FEB 11 2017

The incentive is there for Swansea and Leicester to take a significant stride towards Premier League safety after Saturday's results went almost perfectly.

Middlesbrough were the only side in danger of the drop who managed to pick up a point as the Riverside hosts drew 0-0 with Everton.

Sam Allardyce has never been relegated from the top flight but that record is in danger after his Crystal Palace side were beaten 1-0 at Stoke with Joe Allen scoring the only goal.

Palace, 19th in the table, are 4-5 to be relegated and only Allardyce’s former club, Sunderland, are keeping the Eagles off bottom spot.

Sunderland are 2-7 to go down after a dismal 4-0 loss at home to Southampton with new Italian striker Manolo Gabbiadini hitting a double for Saints. Shane Long was also on target, while Jason Denayer scored an own goal.

Hull went down 2-0 at Arsenal with Alexis Sanchez scoring both goals to take his Premier League tally to 17 for the campaign. Hills make Arsene Wenger 4-6 to start next season as Arsenal manager and he is 11-10 to have departed.

Gareth McAuley grabbed a dramatic last-gasp equaliser for West Brom in a 2-2 draw at West Ham that leaves both sides comfortably in mid-table.