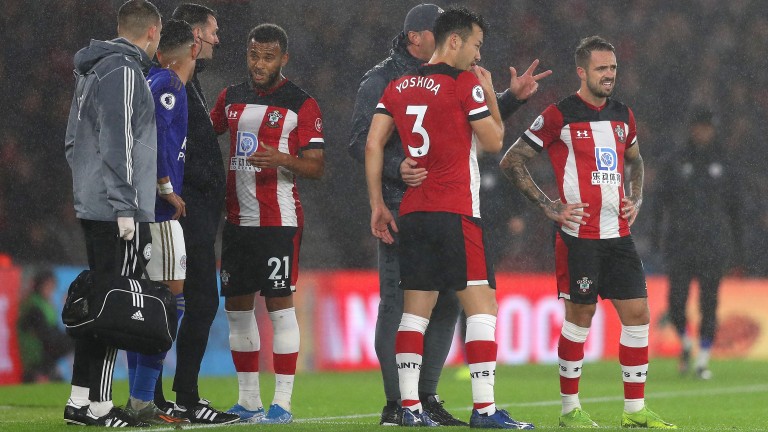 Failure to replace key players is costing Southampton in the Premier League
Naomi Baker
1 of 1
By Matthew Ireland UPDATED 9:53AM, OCT 28 2019

Friday’s 9-0 hammering at home to Leicester has seen Southampton boss Ralph Hasenhuttl slashed from 16-1 to 8-11 in the sack race but the Saints’ demise cannot be laid entirely at the Austrian's feet.

He will rightly take responsibility for one of the Premier League’s worst capitulations but Saints’ star has been on the wane for some time and that is due to those at the top of the club.

Hasenhuttl inherited a poor squad due to the board's inaction in previous transfer windows. Southampton have been happy to sell off prize assets such as Sadio Mane, Virgil van Dijk and Adam Lallana in recent seasons but, despite reinvesting any fees gained, have replaced them with players of inferior quality.

The humiliation they received on Friday was not an isolated incident but the result of sustained mismanagement at the highest level.

2 Toffees are a soft touch

Everton snapped a run of four straight defeats against West Ham last week but frustration quickly set back in at Brighton.

Having battled back to lead 2-1 with ten minutes to play after conceding an early goal, the Toffees capitulated after conceding an innocuous-looking penalty awarded by VAR before Lucas Digne put past his own goalkeeper deep into injury time to consign his side to a sixth loss of the season.

The contentious penalty clearly derailed them in the final stages of the game but the manner in which they were defeated has been all too common under Marco Silva for Everton fans’ liking.

Sam Allardyce injected steel when he took over at Goodison in November 2017 and they need some of that fortitude again.

Leeds were one of the best backed clubs in any division before the season began and the Elland Road side remain favourites to win the Sky Bet Championship.

However, for all their dominance in games they are struggling to find the net and Saturday’s goalless draw with Sheffield Wednesday was another frustrating afternoon in front of goal for the Whites.

It’s now eight games since Marcelo Bielsa’s side scored more than once in a match and their tally of 17 goals scored is ten fewer than their expected-goals figure.

Leeds need to take their chances or risk missing out in what is perhaps the tightest Championship season ever.

4 Addicks a massive price for the top six

Most pre-season guides believed Charlton would be battling against the drop but the Addicks are confounding the pessimists in some style.

The Addicks are eighth in the Championship and Saturday’s draw at West Brom was another positive result against one of the second-tier's big-hitters.

Charlton had already beaten Leeds, Derby and Brentford and drawn with Fulham and Nottingham Forest prior to their visit to the Hawthorns and if they can raise their game to similar levels against other clubs then quotes of 12-1 about them gatercrashing the top six look huge.

After a period of instability Charlton have a clear direction under favourite son Lee Bowyer and their never-say-die attitude is a great quality to possess.

Wycombe are another side punching well above their weight. Just 7-2 for the drop at the start of the Sky Bet League One season, Gareth Ainsworth’s men are up to second in the table after a 1-0 win at Rotherham.

The Chairboys rarely win the stats battles but they are extremely well drilled, a fact underlined by their record of just one defeat all season.