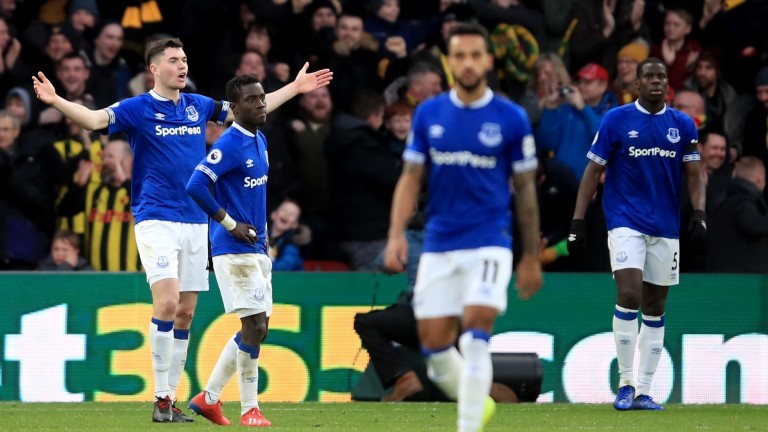 1 Everton are stuck in a rut

Ambitious owner Farhad Moshiri has spent a lot of money since arriving at Everton three years ago but there were no signs of progress on the pitch as the Toffees slipped to a 1-0 defeat at Watford on Saturday.

The loss leaves Everton in mid-table with 33 points from 27 games – one fewer than they had accumulated at the same stage of last season.

Instead of pushing towards the top six, which was their intention after last summer's spending spree, they have fallen five points adrift of Wolves in the race for seventh.

There was no lack of effort from the players at Watford but there was a shortage of quality, which is damning considering the funds spent on improving the squad.

Marco Silva is taking a lot of the flak but it is too simplistic to assume that he is solely to blame. Any manager is only as strong as the players at his disposal and Everton's recruitment has not been up to scratch.

Richarlison, one of their better buys, has faded after a bright start to his Goodison career and Theo Walcott, Cenk Tosun and Morgan Schneiderlin have been expensive flops.

Director of Football Marcel Brands was brought in last year to oversee the club's transfer strategy and he has a massive job on his hands to get Everton moving in the right direction.

There is no disgrace in losing at Liverpool but Bournemouth should be a little concerned that Saturday's 3-0 defeat at Anfield was such a one-sided affair.

Liverpool went into the game after unconvincing 1-1 draws at home to Leicester and away to West Ham but were comfortable from the moment Sadio Mane headed them in front midway through the first half.

The Reds could have scored a hatful and were rarely threatened by Bournemouth, who badly missed the quality of injured winger David Brooks and striker Callum Wilson.

Eddie Howe confirmed last week that Brooks and Wilson are facing a month on the sidelines and their injuries are likely to end any hopes of the Cherries pushing on for seventh place.

3 Bold Sheffield United may get their reward

Sheffield United felt devastated after conceding three late goals in Friday's 3-3 draw at Aston Villa but it was another bold, enterprising display and Chris Wilder's side should remain in the thick of the Sky Bet Championship promotion race.

Whether home or away United always play on the front foot and their high-tempo approach was too much for Villa, who were overwhelmed in the first half an hour.

Two mistakes by United's on-loan Manchester United goalkeeper Dean Henderson allowed Villa back into the game and denied the Blades what would have been a well-deserved victory.

However, Henderson has been hugely impressive for most of the season and may yet have a key role to play in lifting the Yorkshire side into the Premier League.

4 Rochdale destined for League One relegation

Several Coventry players were suffering with flu last week but that did not seem to affect the Sky Blues, who ran out deserved 1-0 winners at Rochdale in Sky Bet League One.

Coventry deserve credit for overcoming the sickness in the camp and recording their first win in six games but questions have to be asked of struggling Dale, who went down with a whimper.

Rochdale's sixth defeat in eight league games leaves them just one point above the drop zone.

Dale's tally of 63 goals conceded is the worst in the division and a big improvement will be needed if they are to preserve their third-tier status.

Notts County have been stuck at the foot of Sky Bet League Two since the end of 2018 but they didn't look like a struggling side in Saturday's 2-1 win at highflying Forest Green.

County have significantly upgraded their squad in January and midfielder Jim O'Brien, one of the new arrivals, opened the scoring in Gloucestershire.

That win followed up an encouraging 1-1 draw at home to leaders Lincoln and if those high standards are maintained it should only be a matter of time before County climb out of the relegation zone.