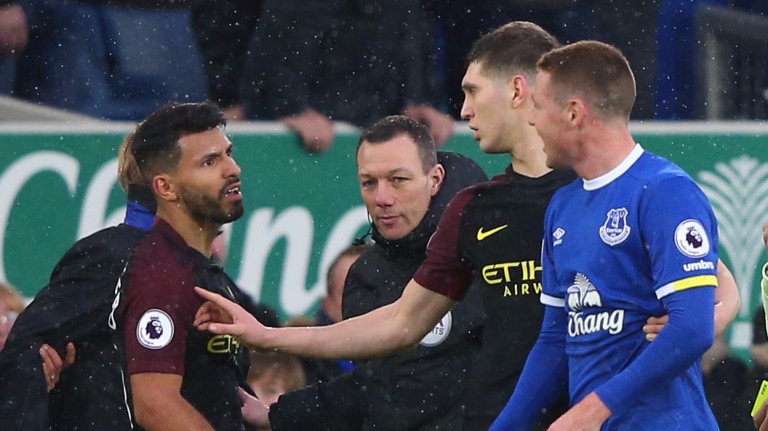 Manchester City have got some of the best individual players in the Premier League but they looked a poor team in the 4-0 loss at Everton which raised huge questions over their credentials in the battle for a top-four berth.

Everton produced an excellent performance and grew in confidence as the game went on but they were given lots of assistance by a City side which showed a lack of heart and lost their shape when the going got tough.

If City’s performance and result was a one-off it would be easier for Pep Guardiola to explain but it merely continued an alarming trend.

Four of City’s five league defeats this season have been by more than one goal and there were similarities between the Goodison Park performance and the debacle at Leicester where they lost 4-2.

Guardiola’s side will get back to scoring goals and may respond with a win at home to Tottenham on Saturday.

However, they have shipped more goals than any of the top seven and their poor defending is likely to cost them a top-four finish.

2 Player power can be tamed

Chelsea might not think they have much to learn from local rivals Fulham but a fine example has been set by the Cottagers in how to deal with an intransigent star player.

Every individual case is different but Fulham looked in a difficult position when top scorer Chris Martin decided he didn’t want to fulfil the rest of his season-long loan from Derby.

A standoff ensured – much like the situation Chelsea face with Diego Costa – with Martin pulling himself out of training with a self-diagnosed injury.

Fulham were advised by various pundits to give in to Martin's wishes of a swift return to Derby but Cottagers' manager Slavisa Jokanovic stood his ground and, after an absence of three games, Martin returned to the fold with a goal and a superb performance in Saturday's 2-0 success at home to Barnsley.

Sheffield Wednesday won a similar battle with their star player Fernando Forestieri who signed a new long-term contract this week, so there is light at the end of the tunnel for the Blues, who will need a focused Costa to spearhead their title push.

3 Happier Hammers better off without Payet

Dimitri Payet's stock among West Ham fans is falling fast but his petulant behaviour may produce an upside for the London club.

West Ham would never have finished seventh last season without the brilliance of Payet but their reliance on the player became unhealthy and left them horribly exposed when he returned from Euro 2016 with a different attitude.

Dropping the Frenchman would have been a difficult call for Hammers' boss Slaven Bilic but the matter was taken out of his hands when Payet refused to train.

West Ham responded with a superb team performance to defeat Crystal Palace 3-0, lifting the doom and gloom around the London Stadium and dispelling the notion that they are a one-man team.

4 Wolves heading for a bright finish

Wolves fans have had to be a patient bunch this season but there are clear signs of a brighter future as they continue to improve under Paul Lambert.

Reaching the top six will be tough for Wolves, who rose to 16th with Saturday's dominant 1-0 victory at home to Aston Villa.

However, they are on the right track for a top-half finish and have an FA Cup fourth round trip to Liverpool or Plymouth to look forward to.

At the start of December Wolves were fourth bottom (outside of the drop zone on goal difference) but they are playing some lovely football under Lambert and are a team to keep on side.

5 Away specialists Exeter could be playoff bound

Exeter have the third-worst home record in Sky Bet League Two but they are just four points outside of the playoffs after winning 3-0 at Grimsby on Saturday.

The Grecians have won their last two home games but their away record – nine wins, one draw and four defeats – has been key to lifting them into promotion contention.

Paul Tisdale’s free-scoring side have won each of their last three games by three goals and may be worth a small bet for promotion at 10-1.