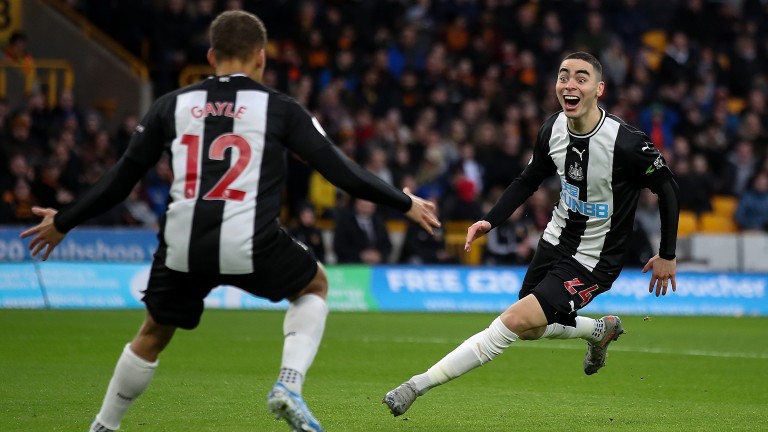 1. Liverpool are winning matches before the starting whistle is blown

Even parking the proverbial double-decker bus does not cut it against Liverpool.

To win 20 of their opening 21 Premier League games - the best start any side in Europe's top five leagues has made to a season - is an astonishing feat. So much so, teams seem to be conceding defeat to the Reds before a ball has been kicked.

Jose Mourinho had to go without a recognised striker with Harry Kane injured but the line-up reeked of caution with Serge Aurier deployed in midfield and they saw only 32 per cent of the ball.

Even a defensive-focused Tottenham team could not get anything from the game. Shall we just award Liverpool the trophy now?

2. Both teams to score looks a solid bet in Southampton fixtures

Southampton exacted their revenge on Leicester for their humiliating 9-0 defeat in October with a 2-1 win on Saturday and it is their attacking impetus which has propelled them into the lofty heights of mid-table.

Averaging more shots per game (12.29) than Tottenham (11.95) and Arsenal (11.9) this campaign, Southampton have beaten Chelsea, Spurs and Leicester since Christmas with Danny Ings, now only three goals off top scorer Jamie Vardy, the greatest beneficiary of the Saints system.

But their shaky rearguard, highlighted by their expected goals against of 31.32, should put punters off backing them and instead opt for goals at both ends in games involving the Saints.

Joelinton scored his only Premier League goal this season on the day of Ben Stokes's Headingley heroics against Australia in the Ashes. That is the extent of the problem facing Newcastle in the final third.

Their top two scorers in all competitions - Jonjo Shelvey and Miguel Almiron - are midfielders and the Paraguayan could now represent their greatest chance of breaking teams down.

The Magpies sit deep which means they may need to rely on shots from distance and Almiron, who has scored in each of their last two games and managed 12 MLS strikes in 2018, is starting to find his feet in the top flight.

4. Deja vu for Arsenal with the Europa League now the likely focus

Delectable fast-paced football sees Arsenal race into the lead before a sloppy individual error sets them back and they fail to win a game they should have had in the bag at half-time.

The Gunners narrative is painfully predictable in the Premier League this term and, after the 1-1 draw with Crystal Palace, they are 11 points off the top four.

It could take some time before Mikel Arteta has Arsenal mixing it with the big boys again but the Spaniard should have identified winning the Europa League - a competition they have made the semi-finals and final of in the last two seasons - as their best way of playing Champions League football next campaign.

After dominating the first half of their FA Cup tie at Arsenal to no avail, Leeds failed to make the most of 14 shots and 68 per cent possession in a 2-0 defeat at home to Sheffield Wednesday.

Patrick Bamford has reached double figures in the Sky Bet Championship scoring charts but looks short of the quality required to lead a team to the title and at least needs some competition up top.

Southampton forward Che Adams, a reported transfer target, could be the answer to their problems but United need to act fast in this window to enhance their attacking armoury.