Five characters who have made their mark at Cricket World Cups

Sunny's epic, Ireland's hero and the catch that shook the cricketing world 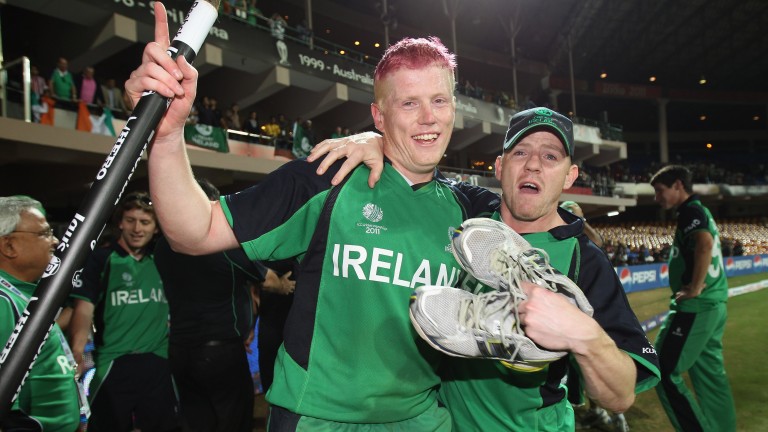 Gavaskar is an undisputed great of the game – the first man to score 10,000 Test runs – but he was responsible for one of the most peculiar innings in World Cup history in the very first game of the inaugural tournament in 1975.

After England piled up a record total of 334-4 from 60 overs at Lord’s, India’s star opener treated the run-chase like an extended net session, batting through the innings to finish unbeaten on 36 off 174 balls.

The reactions to Sunny’s sluggish approach ranged from puzzled to furious. The man himself claimed it was simply down to a lack of form but some observers suggested it was a protest against a team selection with which Gavaskar disagreed.

Whatever the truth, it’s safe to say that one-day batting has progressed since that bizarre day at Lord’s.

While Gavaskar batted for 60 overs for his 36 in 1975, 40 years later a more swashbuckling opener – Brendon McCullum – needed just 13 balls to pass that score in New Zealand's win over England at the 2015 World Cup.

The Zimbabwe fast bowler, a chicken farmer by trade, ruffled England’s feathers at the 1992 World Cup, claiming 4-21 from his ten overs in a nine-run victory in Albury, New Zealand.

England, who went on to lose in the final, were set a target of just 135 but Brandes dismissed the illustrious trio of Graham Gooch, Allan Lamb and Robin Smith before bowling his old schoolmate Graeme Hick for a duck.

Five years later the burly paceman took a hat-trick in another one-day win over England in Harare and he also has a place in cricket folklore thanks to his retort to Glenn McGrath’s inquiry: “Why are you so f***ing fat?” (it's not quite Oscar Wilde, but Google 'Eddo Brandes sledge' if you haven't heard it before).

Modern-day masters Brendon McCullum, David Warner and AB de Villiers are numbers two, three and four in the list of top World Cup batting strike-rates but top of the pile is a man who lit up the 1999 World Cup in England.

All-rounder Klusener was South Africa’s leading wicket-taker at the tournament, eclipsing his legendary teammates Allan Donald and Shaun Pollock, and he also topped the Proteas’ batting averages thanks to some brilliant lower-order hitting.

The left-hander scored 281 runs in eight innings, finishing not out in six of them, but his campaign ended in the cruellest of circumstances in the semi-final against Australia at Edgbaston.

With the scores level, an agonising mix-up saw Donald run out and Klusener, who had belted 31 off 16 balls, left stranded at the other end. The tie was enough to take the Aussies through to the final and left South Africa labelled as big-game chokers – a reputation they are still trying to shake off.

A World Cup is the stage for big players to shine and there were few bigger than 20-stone Bermuda spinner Leverock, who produced one of cricket’s most joyous moments against India at the 2007 tournament.

Leverock snared a wonderful diving slip catch to get rid of India opener Robin Uthappa in the second over of the match, reducing 17-year-old bowler Malachi Jones to tears and delighting television viewers all round the world.

Jones returned the favour later in the innings in Port of Spain, catching Yuvraj Singh on the boundary as left-arm spinner Leverock finished with figures of 1-96 off his ten overs.

And the big man will always have a place in the hearts of cricket fans thanks to what one Cricinfo reporter described as “the catch that shook the world”.

O’Brien’s blistering knock of 113 off 63 balls powered Ireland to a sensational victory over England at the 2011 World Cup, and the all-rounder became an instant cult hero in the process.

Not only did he drag his team from 111-5 to a record target of 328 in Bangalore but he did it while proudly sporting a pink hairdo, having dyed his ginger locks to raise money for a cancer charity.

The younger brother of wicketkeeper Niall, Kevin again proved that he is the man for the big occasion when scoring a century in Ireland’s inaugural Test match against Pakistan last year.

Don't miss our great Cricket World Cup pullout in the Racing Post on Wednesday May 29.