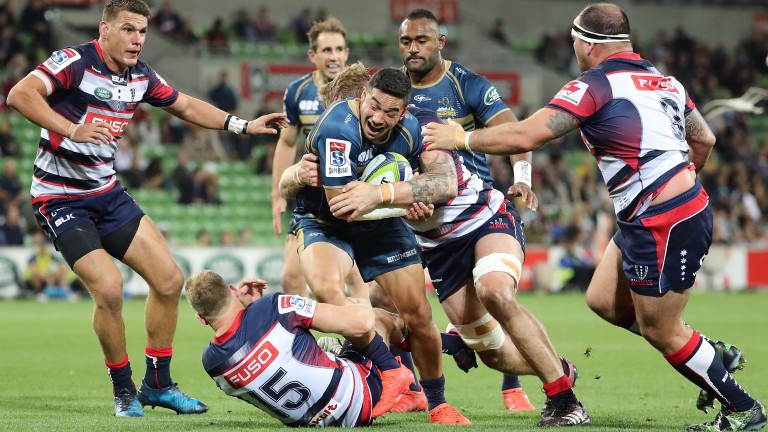 There's barely time for the dust to settle after the first match of the Lions tour before it's off to Australia for a Super Rugby double-header.

After back-to-back home defeats the Brumbies have returned from a trip round the world with victories over the Kings in Port Elizabeth and Los Jaguares in Buenos Aires in the bag. They were edged out 19-17 by the Rebels in Melbourne in round eight but are 16-point handicap favourites for the return.

That was the Rebels' only win of the season and they have shipped 32 tries in their last five matches, three of them at home. But they scored three of their own last time out against the all-conquering Crusaders and stayed within a big handicap.

The Brumbies' long-haul exertions may have an effect and it may be that their defence feels it the most. This fixture has swung between low-scoring grinds and blowouts over the last few seasons and this looks set to be one of the more entertaining clashes.

The Hurricanes have been the tryscoring hotshots of this Super Rugby campaign with a tally of 77 in 12 games and the Western Force fit the profile of the teams who have leaked the most against them.

They have played seven matches against teams currently lying outside the playoff places and have scored 53 tries in those games, including 11 and 13 against the bottom two teams, the Rebels and Sunwolves.

The Force are not quite on that level and go into this game after an impressive 40-26 victory at the Reds but their last home match against New Zealand opponents resulted in an eight-try rout at the hands of the Highlanders.

The first half of that clash was reasonably competitive as the Highlanders led 17-6 at the break but they ran in 38 unanswered points after the break.

The Force have made just one change from last week's effort against the Reds and they may struggle to keep out the fired-up Canes as the game wears on.