Spaniard off to a solid start on course debut 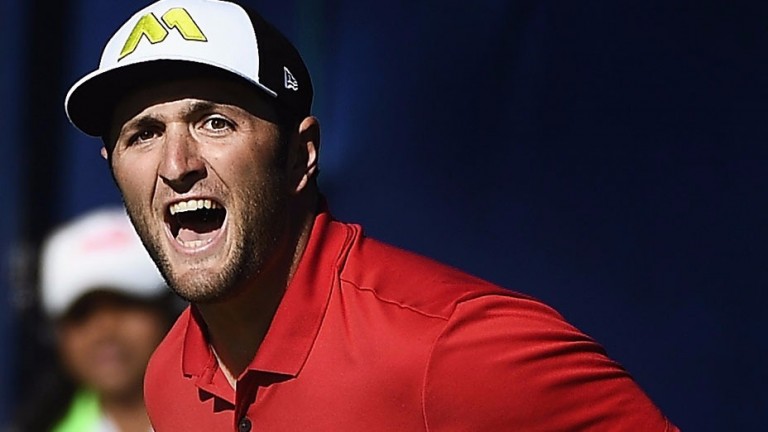 Brilliant Spanish youngster Jon Rahm could be set for East Lake glory
Getty Images
1 of 1
By Steve Palmer 9:07AM, SEP 23 2017

Justin Thomas took control of both the Tour Championship and the FedEx Cup in round two of the US Tour finale at East Lake, Georgia.

Thomas, second in the FedEx Cup standings, was a 12-1 chance for the Tour Championship on tournament eve. He signed off on Friday with an eagle, though, and is no bigger than 100-30 at the halfway stage of the mega-bucks event.

Thomas shares the lead on seven under par with Paul Casey and Webb Simpson. Patrick Reed, Justin Rose, Gary Woodland and Jon Rahm are only one shot behind on a congested leaderboard.

FedEx Cup leader Jordan Spieth endured one of the worst putting rounds of his career, missing from eight feet or shorter on five occasions. Spieth still managed to card a level-par 70, but headed into the weekend with a four-shot deficit to overcome.

World number one Dustin Johnson is on the same score at Spieth, sharing 15th place in the 30-runner field. Johnson can be backed at 18-1 to fight back for Tour Championship glory, while Spieth is a stand-out 16-1 with BoyleSports. They tee off together in round three at 6.25pm UK and Ireland time.

Both have a serious mission on their hands, though, given the quality ahead of them. Thomas is a deserving favourite, the USPGA champion having played beautifully from tee to green this week, while Jon Rahm looks the biggest danger.

Rahm was making his East Lake debut this week, so starting with a pair of 67s is a fantastic effort, particularly given he has suffered great misfortune on the greens. The Spaniard should be more comfortable on the track with two rounds under his belt and the general 7-1 looks the best outright value on offer at this stage.

Third-round twoball punters are pointed towards Rahm for another sunny, calm day in Georgia. Rahm is an understandably short price to account for Xander Schauffele in the 7.05pm match.

Those looking for bigger prices should consider Kevin Kisner, who can prove too steady for Jason Day in the 6.45pm contest.