Federer to carry on the good work against Nishikori 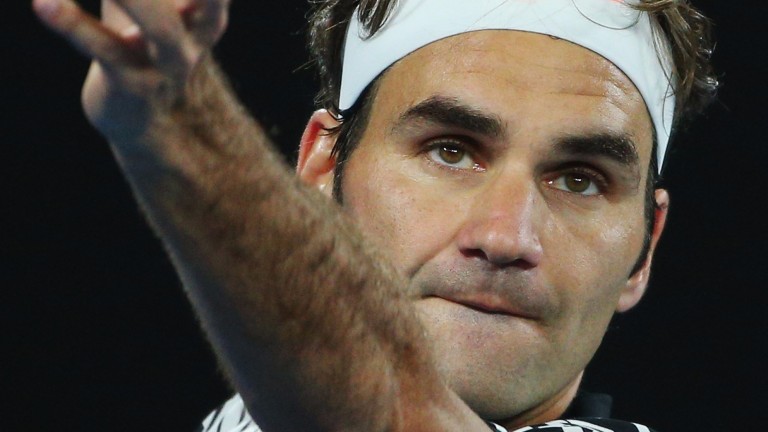 Roger Federer looks as if he means business in Melbourne
Michael Dodge
1 of 1
By Adrian Humphries 7:57PM, JAN 20 2017

Federer v Nishikori
Roger Federer faces a tougher test of his Australian Open title claims in round four than he did in the last 32, but it may be worth keeping faith with the Swiss legend.

Tomas Berdych was swept aside 6-2 6-4 6-4 in round three, but Kei Nishikori is likely to offer stiffer resistance than the Czech.

Federer can still be backed – the winner will most likely play Andy Murray – but as the 17-time Grand Slam hero is a shorter price to beat Nishikori than he was Berdych punters should think twice before lumping on against a more dangerous opponent.

Having been a best-priced 28-1 outright, Federer, who was cut to 14-1 after the victory, said: “Kei’s had a great few seasons and he has one of the best backhands in the business, but I’m ready now – no turning back.”

It’s way too soon to go over­board about Federer’s chances at a venue where the heat does not help his title chance, but the fact that Nishikori was beaten in the Brisbane final by Grigor Dimitrov and needed five sets to dump Andrey Kuznetsov in round one suggests the 35-year-old has a genuine opportunity to kick on.

Barthel v V Williams
Venus Williams is enjoying a decent singles run at Melbourne Park, but the veteran American has beaten little and it may get tougher for her in round four.

The elder Williams sister bullied Ying-Ying Duan in her latest outing, dropping just a solitary game against the improving Chinese player. But that may not be the case when she meets Mona Barthel.

The German looked a superb talent when climbing up the pro ranks five or six years ago. She won titles but her earlier career failed to live up to its promise.

Having dropped to a ranking in the 180s, qualifier Barthel is going in under the radar in Victoria and she has enough quality to pose problems for her seasoned rival.

Pavlyuchenkova v Kuznetsova
Anastasia Pavlyuchenkova is getting better and punters can definitely consider backing her to upset Svetlana Kuznetsova and progress to the quarter-finals.

But there’s not much meat in Pavs’ quote – she is just 1-2 to win at least a set – and while that should oblige the price looks too short to take.