Federer 11-4 favourite to make it nine next year 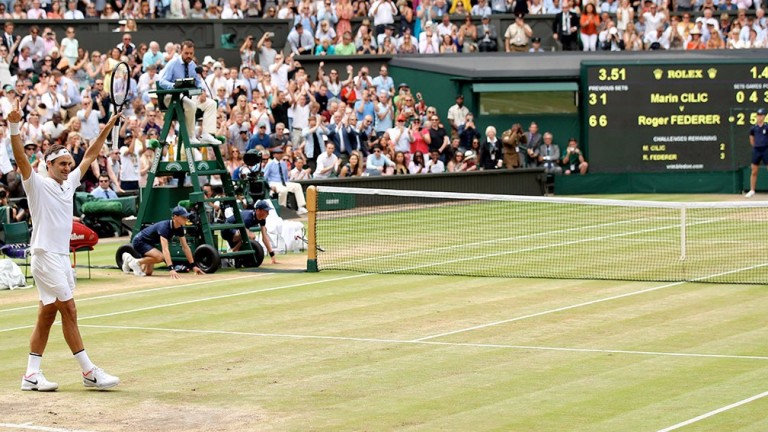 Roger Federer is 11-4 with bet365 to make it nine Wimbledon triumphs next year after capturing a record eighth All England Club men’s singles crown thanks to a 6-3 6-1 6-4 victory over Marin Cilic on Sunday.

Federer, who won his first Wimbledon crown in 2003, also won the Australian Open in January and extended his Grand Slam haul to 19.

Having missed the clay campaign and the French Open in order to concentrate on the grass season, Federer, the oldest men’s singles winner at Wimbledon in the professional era, is 3-1 favourite to secure three out of four Slams this year by winning the US Open, which starts on the New York hardcourts next month.

Bet365 go 4-7 that one of Federer, Andy Murray, Novak Djokovic or Rafael Nadal, who have dominated the grass-court championship since 2003, wins Wimbledon next season.

They make Djokovic 4-1 second favourite for next year’s Wimbledon, then it’s 5-1 Murray and 8-1 Nadal.

Interestingly, bet365 reckon Alexander Zverev could be the one to test the big guns most and make the German 12-1 joint-fifth favourite alongside Milos Raonic. Cilic is 16-1 to go one better.

Bet365 spokesman Steve Freeth said his firm, who quoted Federer at 16-1 to win Wimbledon in 2017 immediately after Andy Murray’s 2016 triumph, were left licking their wounds after the Swiss legend sealed his seventh successive straight-sets triumph in the last fortnight.

He said: “We face a hefty payout on Federer. The fella is a Rolls-Royce.”

Federer joked: “I have got to take more time off. Not to drop a set is just great. I always thought I could come back and do it again.”