Ashwin loves it in Chennai 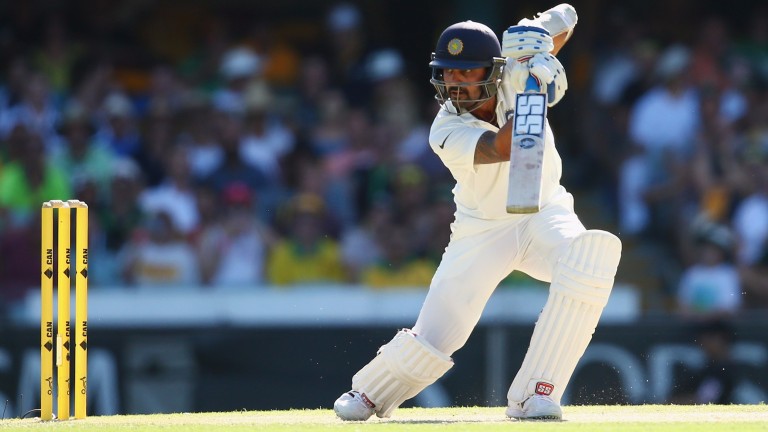 Murali Vijay has scored two centuries in the Test series against England
Cameron Spencer
1 of 1
By James Milton 7:55PM, DEC 14 2016

After a crushing innings defeat in Mumbai, England have only pride to play for in the fifth and final Test in Chennai and India are 8-13 to complete a 4-0 series win.

That scoreline wouldn’t be a huge surprise – the 4-0 and 5-0 India wins were joint-favourites at 4-1 at the start of the series – but England failed to build on a promising first-Test display.

They scored 537 in the first innings of the series, ending up just four wickets from victory on the final day in Rajkot, but India have shown their class in the subsequent three Tests.

India’s superstars stepped up at the Wankhede Stadium as Virat Kohli’s superb 235 and Ravichandran Ashwin’s 12 wickets condemned England to a heavy defeat in Mumbai.

Visiting teams find it difficult to haul themselves out of a slump in India – New Zealand lost the final Test of their series in October by 321 runs while last year South Africa were crushed by 337 runs in their dead rubber.

And Ashwin’s altercation with James Anderson late on in the Mumbai Test suggests India aren’t in the mood to ease up.

Venue
A cyclone caused damage to the MA Chidambaram Stadium on Monday but the Tamil Nadu authorities are confident the Test will go ahead as planned (the Brabourne Stadium in Mumbai is on standby).

India chased down 387 to beat England in 2008 and have since played only one Test at the ground – an eight-wicket win over Australia in which, ominously for England, Kohli scored a century and Ashwin took 7-103 and 5-95.

Team news
India could be unchanged after their impressive Mumbai win but England must be tempted to pick an additional spinner.

Liam Dawson or Gareth Batty are the slow-bowling options while Stuart Broad could return from a foot injury.

Weather
Cyclone Vardah passed through Chennai on Monday but the forecast is good for the Test.

There may be the odd shower on day one but the following four days should be dry with temperatures reaching 28C.

Best bets
England won an important toss in Mumbai yet still lost by an innings and 36 runs and the 11-2 about the tourists reflects their struggles against spin.

Kohli’s brilliant double-ton at the Wankhede Stadium meant the skipper pipped Ashwin to the man-of-the-match award in the fourth Test but the spinner is worth backing to get the nod at a venue he loves.

He took 12 wickets against Australia three years ago and had several successful seasons with Chennai Super Kings in the IPL.

On a visit to Chennai earlier this year Ashwin claimed he would like to “take this ground in my back pocket wherever I go” so there is unlikely to be any respite for England’s demoralised batsmen.

Opener Murali Vijay, another former CSK man, was also overshadowed by Kohli’s heroics in Mumbai but he played beautifully for his 136 – his second first-innings century in the series.

All eight of Vijay’s Test hundreds have come in India’s first innings and he is worth a small bet at 6-1 to score reach three figures at a ground he knows well.

Despite the 3-0 scoreline there have been positives for England – the emergence of openers Haseeb Hameed and Keaton Jennings, the return of Jos Buttler and the batting form of Jonny Bairstow.