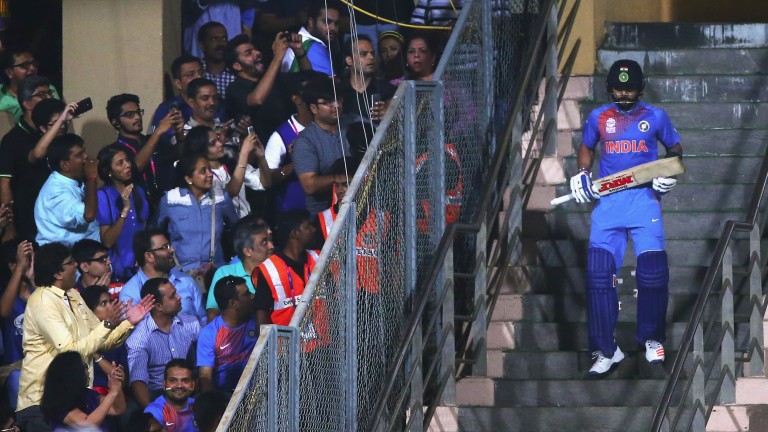 England's batsmen struggled against India’s spinners in the Test series before Christmas and their 50-over side will hope to handle conditions better when the first of three ODIs starts in Pune on Sunday morning.

India’s last two home one-day series were hard-fought contests – a 3-2 defeat to South Africa in 2015 and a 3-2 victory over
New Zealand last year.

They bowled out the Kiwis for just 79 in the deciding game of that series, despite the absence of star spinners Ravindra Jadeja and Ravichandran Ashwin, and bet365 go 11-4 about a 3-0
India win.

However, England have improved dramatically since the 2015 World Cup debacle, winning five of their seven one-day series and losing the others to Australia and South Africa, both by a 3-2 scoreline. The 11-8 about a 2-1 India victory is worth a small bet.

England’s one-day batting has been brilliant at times but their
ultra-aggressive approach can also lead to collapses against disciplined bowling.

Their inconsistency was apparent in two warm-up games against India A. They chased down 305 to win the first game before slumping to a heavy defeat on Thursday, with golden ducks for captain Eoin Morgan and key batsman Jos Buttler.

Morgan’s opposite number Virat Kohli has no such problem with consistency and he can follow up his wonderful Test series with some ODI fireworks.

Kohli has taken over as ODI skipper from MS Dhoni, who remains in the team as a batsman and wicketkeeper, and the extra responsibility is unlike to trouble the cricket-crazy nation’s new darling.

He scored 358 runs in the five games against New Zealand – 114 more than any other player in the series – and his one-day record is astounding, particularly at home where he has 18 fifties and 11 centuries in 65 innings.

Kohli top-scored for India with 61 in the only previous ODI in Pune and the 5-2 that the outstanding number three does so again is well worth taking.

England’s batting depth means their top-runscorer market is a tricky betting heat but openers Jason Roy and Alex Hales could help the tourists make a fast start to the first ODI.

The runs line for the fall of England’s first wicket is chalked up at 23.5 but that may underrate Roy and Hales.

They enjoyed themselves in the warm-up matches in Mumbai, putting on 95 and 42 in typically entertaining fashion and no
new-ball attack is safe when they get going.