Fallen champions could go from heroes to zeroes 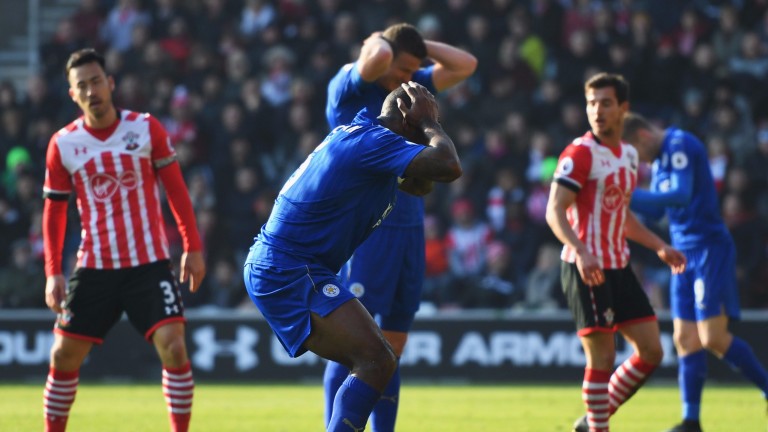 Leicester are having a miserable Premier League season
Mike Hewitt
1 of 1
By Mark Langdon 6:07PM, JAN 22 2017

1 Fallen Foxes could easily get dragged into dogfight
Leicester were not just beaten by Southampton on Sunday, they were smashed 3-0 and Claudio Ranieri must be getting concerned about City's chances of staying in the top flight.

With a couple of teams towards the bottom beginning to show signs of life, most notably Swansea with their 3-2 success at Liverpool, Leicester need to be extremely careful.

Three of their next six league matches are against Manchester United, Liverpool and Arsenal, and with the Champions League resuming next month their season could get extremely complicated.

Jamie Vardy has failed to score in 19 of his last 20 club matches and there will be talk of a crisis if the champions get chinned at Burnley in their next Premier League contest.

2 Big problems for Big Sam
Sam Allardyce is still waiting for his first Premier League win as Crystal Palace manager after the Eagles were deservedly beaten 1-0 by Everton.

Seamus Coleman scored the winner late on but Everton dominated the shots-on-target count 8-2 and Big Sam said afterwards he is struggling to bring in new players to Selhurst Park.

Palace, who are now in the relegation zone, have kept one clean sheet in the Premier League this season and it is possible Allardyce has returned to football too soon after his England heartbreak.

3 Tractor Boys are stuck in a rut
It has been a miserable week for Ipswich boss Mick McCarthy. His side were dumped out of the FA Cup by non-league Lincoln and beaten 2-0 at Huddersfield in the Terriers' first victory by more than one goal in the Sky Bet Championship this season.

A lack of investment has not helped McCarthy but everything about the Tractor Boys feels stale.

Owner Marcus Evans doesn't seem interested, the fans are bored and even McCarthy is struggling to lift an average squad who face a terrible run of fixtures in the remainder of January and February.

There do not appear to be many cheap points available in matches against Preston (away), Derby (home), Reading (home), Aston Villa (away), Brighton (away), Leeds (home) and Norwich (away) and they could easily start March with less of a buffer between themselves and the drop than the current nine points.

4 Keep Barnet on your side
Henry Newman, one half of Barnet's new management team, said after their stalemate against Newport: "Joe Day (Newport's goalkeeper) was the difference between 0-0 and 5-0. It was plain to see how many saves he made."

There was major market confidence behind Barnet on Saturday - they went off odds-on having been 6-5 - and dominated with 18 shots to Newport's seven and 57 per cent of the possession.

They are far from a flashy side so could be underrated in the weeks to come.

5 Nolan taken on massive task at Notts
Recently-appointed Notts County manager Kevin Nolan will have known he was taking on a difficult job but the full extent of that was shown in the 2-0 defeat at Grimsby.

Nolan blamed defensive mistakes on the defeat but they had only one shot on target in the 90 minutes and in last week's 0-0 draw with Mansfield they had no attempts on target.

Notts have lost 11 of their last 12 Sky Bet League Two matches and are clearly struggling to make anything happen in the final third, while Nolan is unhappy with the defence.

Put the two together and there are big issues at Meadow Lane.