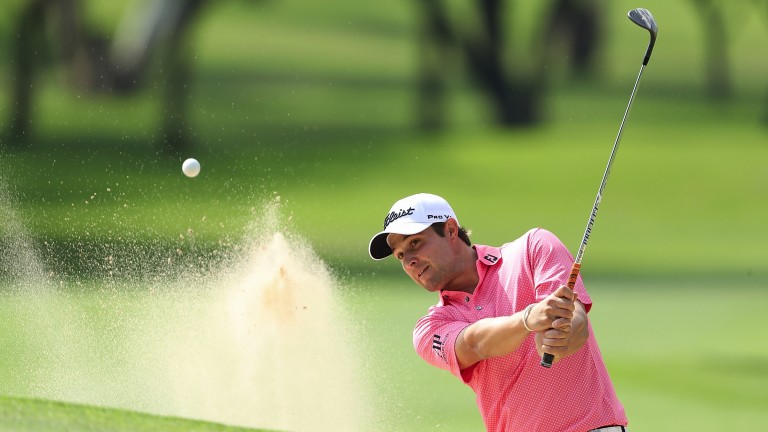 Dylan Frittelli and Pablo Larrazabal appear to have played to the absolute maximum of their ability over the first three days of the China Open, the buzzing duo separating themselves from the rest of the field at Topwin Country Club, Beijing.

Frittelli, chasing a maiden European Tour title, is at 19 under par through 54 holes, while Larrazabal is 16 under. The chasing pack is four shots behind and the pacesetting duo could quickly turn the tournament into a two-runner race if they maintain their red-hot form on Sunday.

Neither man has a pretty swing – Larrazabal's is particularly ugly – but the golf has been exceptional. Frittelli has hardly put a foot wrong for two days, firing a second-round 63 and following up with a 64 from the final pairing in round three. The South African, a top-price 45-1 ante-post, has become 8-15 favourite.

Larrazabal had a three-shot halfway lead and goes into round four three shots behind due to Frittelli's brilliance. Larrazabal is 11-4 to overcome the deficit and claim a fifth European Tour title, while it is 18-1 bar the front two.

Dylan Frittelli has played like Superman over the last two rounds of the China Open and even the inevitable Sunday nerves of the Tour maiden will probably not stop him claiming a breakthrough victory.

Frittelli has made one eagle, 15 birdies and 20 pars in his last 36 holes, rarely looking in any danger of dropping a shot, and the potential the 26-year-old Joburg boy has shown over the last decade appears to be being realised.

Frittelli played alongside Jordan Spieth at the University of Texas, then won twice on the Challenge Tour before establishing himself on the European Tour. He had a winning chance in the Shenzhen International last week, eventually finishing fifth, but the China Open is a much easier assignment to successfully complete.

Last week, Frittelli was three shots behind Bernd Wiesberger entering round four, with Dean Burmester, George Coetzee, Ross Fisher and David Lipsky only a shot behind him, and the likes of Alexander Levy, Bubba Watson, Thorbjorn Olesen and Tommy Fleetwood lurking just off the pace. It was a tough ask to see all them off.

This week, it appears a case of Frittelli having just one man to beat – a player over whom he already has a three-shot advantage. And although Pablo Larrazabal has four European Tour titles in his locker, the moody Spaniard has always been difficult to trust. His volatile temperament and questionable technique means card-busting errors are a constant concern for his supporters.

Alexander Levy has been working on his swing, having teamed up with new coach Pete Cowen in the middle of last month, so his inconsistency this week (63, 70, 71) is understandable. The Frenchman may conjure another 63 to finish, but even that will probably not be enough to win given the groove Frittelli has found.

Racing Post Sport followers will be hoping ante-post headline selection Haotong Li can claim one of the each-way places – the Chinaman is tied for seventh. Li is 150-1 for victory, though, and requires a serious meltdown from Frittelli and Larrazabal to have any hope of defending his title.

Frittelli at 8-15 is the outright recommendation for those with deep pockets, while final-round twoball punters should consider Peter Uihlein, who struggled for rhythm over the closing eight holes of round three after playing partner Peter Hanson withdrew with a back injury.

Waiting ages to hit every shot, Uihlein played his final seven holes in two over par, a frustrating stretch which included two par fives. The American will be back in a twoball today, has been playing solid golf all season, and can account for struggling Belgian Nicolas Colsaerts in the 3.20am (UK and Ireland time, Sunday morning) match.

The final pairing of Frittelli and Larrazabal is scheduled to tee off at 5.45am.