American raider to warm up for Open in style 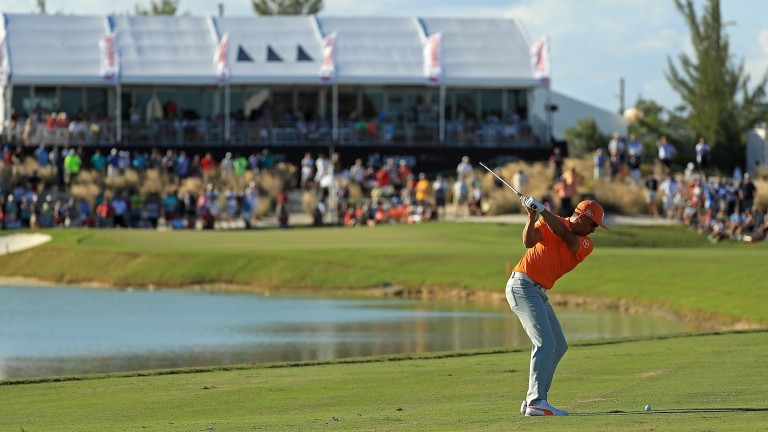 Masters champion Patrick Reed is using the Scottish Open to warm up for the big one at Carnoustie next week, while his fellow Americans Rickie Fowler, Matt Kuchar and Phil Mickelson have also jetted across the Atlantic to hone their game on the Gullane links.

Englishman Justin Rose, a general 16-1 chance for the third Major of the season next week, is clear favourite with most firms for the Scottish Open. Mickelson won the Scottish, then the Open, in 2013, and six of the last eight Open champions competed in the Scottish the previous week.

Russell Knox, Irish Open champion after some magical long putting on Sunday, is well fancied for his national Open this week, while Ryan Fox, beaten by Knox in the Irish playoff, gets another chance to bolster an increasingly impressive links record.

Palmer's top tip
Rickie Fowler 11-1
The top players know that the Scottish Open is a more than useful exercise – Zach Johnson and Jordan Spieth are the only recent Open champions who did not tee up in Scotland the week before – and most of the elite at Gullane should be fully focused.

The best bet of all must be Fowler, who has a solid record generally in tournaments preceding Majors. The Californian is the only course winner in this field, having triumphed in 2015 with three birdies in his final four holes, an explosive and gutsy finish.

Fowler loves links golf, boasting Scottish Open form figures of 8-1-9, and he has twice finished in the top five in the Open, sharing second place behind Rory McIlroy at Hoylake in 2014. He is extremely comfortable overseas, a fact underlined by victories in Korea, Abu Dhabi and the Bahamas, and has never been happier off the course, having got engaged last month.

Fowler is keen to get off the mark for 2018 – his last success was a four-shot romp in the Hero World Challenge in December – and he will realise Gullane provides a fantastic opportunity to remind his rivals how dangerous he is with regards to the imminent battle for the Claret Jug.

A runner-up finish in the Masters in April – he was one shot shy of Patrick Reed – showed Fowler was close to his best. And he arrived in Scotland after four consecutive top-20s, culminating in 12th spot in the Quicken Loans National.

Next best
Mikko Ilonen 125-1
Finnish ace Mikko Ilonen freshened himself up with a summer break in the Dominican Republic, then headed for Enniscrone Golf Club, where he won the 1999 West of Ireland Amateur Championship, for some links practice prior to the Irish Open.

Ilonen struck his ball superbly in the Irish Open, finishing third for greens in regulation and carding four rounds of par or better, but uncharacteristically poor putting meant he tied for 19th place. If he marries that ball-striking with a more typical putting performance in Scotland, the five-time European Tour champion can contend for the title.

Ilonen, who posted four rounds of par or better at Gullane in 2015, won the Irish Open in 2014, then the Volvo Match Play in Kent four months later. He was Amateur champion at Hoylake in 2000, ninth in the 2001 Open and is fully at ease on links terrain.

Other selection
Benjamin Hebert 175-1
Hungry maiden Benjamin Hebert should see this event as another good chance to make an overdue breakthrough. The six-times Challenge Tour champion was an unlucky loser in the final of the Belgian Knockout at the end of May and has played some solid golf since, including a share of 28th place in Ireland last week.

The precise Frenchman, fourth in the 2015 Dunhill Links Championship and eighth in the 2017 Irish Open, has the tools to handle a firm, fast links, and can improve significantly on the 53rd place he managed when in dismal form teeing up at Gullane three years ago.

Others to note
Matthew Fitzpatrick
The four-time European Tour champion looks a big price on a suitable track, but will World Cup fever distract the Sheffield United fan?

Chris Wood
Another Englishman who has proved himself on links terrain and could be dangerous. He is also footy-mad and will soon join Fitzpatrick, Rose and others in either World Cup joy or despair.

Paul Dunne
The Irishman loves a links test and could take a shine to Gullane on his debut. He has to be shortlisted, but was appallingly inaccurate off the tee last week.

Alexander Bjork
The measured Swede should fall in love with Gullane on his first visit. The China Open champ has fully established himself as one of the European Tour's best.

Joakim Lagergren
Another Swede to consider. He has a great links record and won his maiden European Tour title in Sicily two months ago.

Matthew Southgate
A different English Southgate has been hogging the headlines, but Matthew is a superb links exponent who could make waves of his own at Gullane.

Course winner taking part Rickie Fowler
When to bet By 6.30am on Thursday
Where to watch Live on Sky Sports from 10.30am Thursday

Course overview The Gullane layout taking centre stage this week was used for the first time in 2015, a composite Championship track made up of holes from the Club's No. 1 (16 holes) and No. 2 (two holes) courses.

This is its second crack at hosting the Scottish Open. It is a traditional links, described as “fair and straightforward” by local man Stephen Gallacher, who uses Gullane as an off-season training base.

The two par-fives (the second and 16th) are good birdie chances, while all the par-threes are 194 yards or shorter. Gullane plays firm and fast when the weather allows, which is certainly the case this week.

Story of last year Rafael Cabrera-Bello overcame Callum Shinkwin in a playoff at the Dundonald Links.

Weather forecast Sunny throughout, with hardly any breeze, peaking on Sunday afternoon.

Type of player suited to challenge Gullane is a tough test with wind whipping across it, but a benign weather forecast suggests birdies should be plentiful. Short-game magic won the tournament for Fowler at this track in 2015. Support strong links performers who are sharp on the greens.