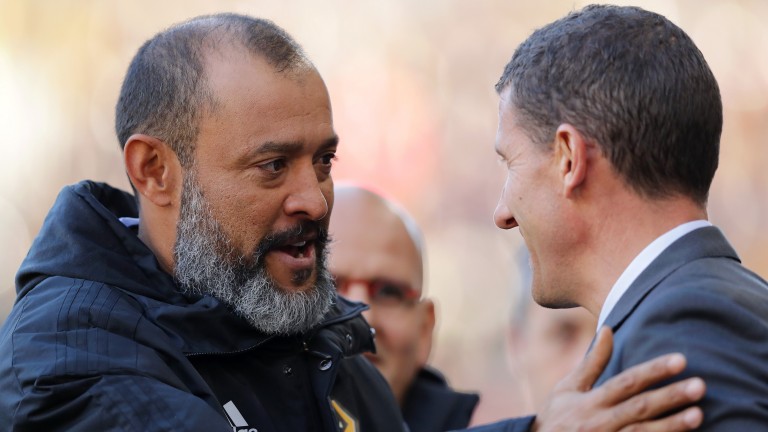 Nuno's Wolves and Javi Gracia's Watford could be difficult to separate
Richard Heathcote
1 of 1
By Mark Langdon 8:00PM, APR 6 2019

There has been little between Wolves and Watford in this season's Premier League and it could be close when they meet in Sunday's FA Cup semi-final at Wembley.

Wolves are one point better off after 32 matches with a goal difference that is also one better than Watford's.

They arguably also have the added touch of class that may make the difference, so they are understandably narrow favourites, although the tie looks set to be settled by a narrow margin.

The decisive moment may not happen until extra-time or penalties and the 90-minute draw looks the pick of the bets.

Wolves have already won at Wembley this season, beating Tottenham 3-1 over the chaotic festive period, and they probably arrive in the capital with greater expectation on their shoulders as they go in search of a first FA Cup final appearance since 1960.

Nuno's men have loved life in the Premier League following last season's promotion and have had a difficult run to this stage with victories over Liverpool and Manchester United in earlier rounds.

Wolves have thrived in matches where they are not expected to make the running and they beat United again on Tuesday, this time in the league, to continue the positive trend against the big six.

In recent weeks however, Nuno's men have drawn with Newcastle and Bournemouth and lost to Huddersfield and Burnley to further suggest the 3-5-2 formation works better as a counter-attacking weapon.

Diogo Jota thrives on the break alongside fellow forward Raul Jimenez and there is a solid base outside of the back three.

Wing-backs Jonny and Matt Doherty can easily drop into a defensive five when they don't have the ball, while midfielders Ruben Neves, Joao Moutinho and Leander Dendoncker add another layer of security.

Dendoncker, who spent much of last season as a centre-back for Anderlecht, has forced his way into the team at the expense of an extra forward since Watford stormed Molineux with a deserved 2-0 triumph in October.

While Wolves thrive against the big six, Watford are, perhaps more naturally, the masters of tackling teams outside England's elite.

In 22 Premier League matches against the non-big six Watford have won 12 and drawn seven, collecting 43 points and suffering just three defeats, the last of which came at Leicester on December 1.

Since that Leicester setback the Hornets have lost six times - against Manchester City twice, United, Liverpool, Tottenham and Chelsea.

Javi Gracia has a well-organised side and there is plenty of physicality right through the spine with Troy Deeney the spearhead and midfield sitters Etienne Capoue and Abdolaye Doucoure capable of mixing it with the best.

Team news
Watford
Roberto Pereyra and Isaac Success have returned to training and could be available, but Tom Cleverley and Adalberto Penaranda are out. Javi Gracia has refused to confirm whether cup goalkeeper Heurelho Gomes will keep his spot at the expense of Ben Foster.