Liverpool's lethal front three can make the difference at Wembley 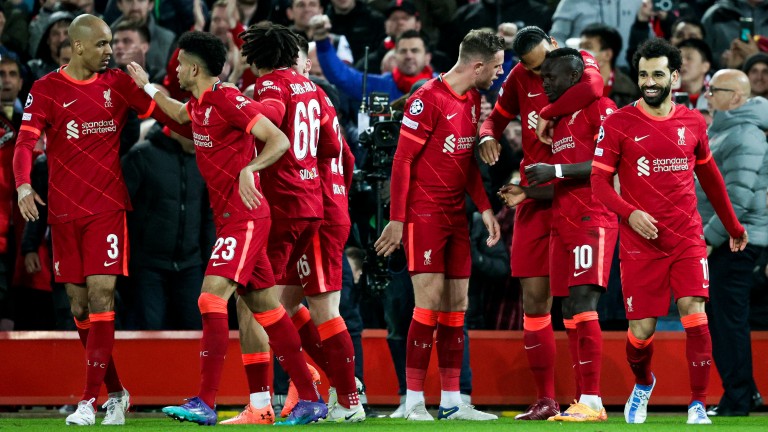 Lethal Liverpool could be celebrating more Wembley success
Soccrates Images
1 of 1
By Dan Childs 11:20AM, MAY 13 2022

Liverpool
Fabinho (hamstring) has been ruled out after limping out of Tuesday's 2-1 victory at Aston Villa.

Liverpool's hopes of winning the quadruple appear to be fading but the Reds can secure their second trophy of the season by defeating Chelsea in Saturday's FA Cup final at Wembley.

Jurgen Klopp's side have shared a pair of draws with the Blues in the Premier League this term and came through a marathon penalty shootout against Thomas Tuchel's men in February's League Cup final.

However, they have been in far superior form to the Blues in recent months and look a solid wager to prevail within normal time when they reconvene at the national stadium.

The trip to Wembley comes at the end of a busy week for both clubs. Liverpool kept their slim title hopes alive with a 2-1 success at Aston Villa on Tuesday, while Chelsea moved to the brink of Champions League qualification with a 3-0 triumph at Leeds on Wednesday.

Having to play less than three days before the final was far from ideal for Chelsea, although a potentially tricky test at Elland Road was made much easier by Dan James's 24th-minute red card.

The Blues comfortably took advantage of their relegation-threatened hosts, but given the poor standard of opposition it is hard to read too much into their victory.

Tuchel's side certainly improved on their recent efforts away to Everton (0-1) and at home to Wolves (2-2) and there was further evidence of a renaissance from Romelu Lukaku, who netted his third goal in two games.

It is entirely possible that Lukaku, along with several of Chelsea's big players, have been struggling to motivate themselves in the league and will look to raise their levels for the cup final.

However, it can be difficult to turn performances off and on like a tap and it seems more likely that Chelsea will play closer to the standards shown in recent weeks rather than the high levels they reached on occasions earlier in the season.

Some of Chelsea's best performances this season have been against Liverpool. They recorded a deserved 1-1 draw at Anfield in August despite Reece James's first-half dismissal and were the dominant side for the majority of January's 2-2 draw at Stamford Bridge.

The League Cup final was more even - and was ultimately decided by Kepa Arrizabalaga's wayward shootout effort - but Chelsea's Premier League fortunes have dipped in the final half of the season and, having topped to table in December, they find themselves 18 points adrift of England's top two.

Successful sides find a way of staying consistent and Liverpool have gone from strength to strength, losing just one of 31 games this year.

They were reluctant to spend in January but were prompted to act after Tottenham showed interest in one of their top targets Luis Diaz, and the decision to conclude a swift deal for the Colombian has given their attack another dimension.

Diaz faced fierce competition for places in the Liverpool front line but he has been unfazed by the challenge and is having a big impact on a regular basis.

The 25-year-old's second-half introduction in second leg of the Reds'  Champions League semi-final at Villarreal was key to turning a 2-0 deficit into a 3-2 victory, and his equaliser against Tottenham last weekend and superb assist for Sadio Mane's winning goal at Villa on Tuesday has kept Liverpool's title hopes alive.

Klopp must be sorely tempted to start Diaz at Wembley but he has a conundrum to solve in midfield after Fabinho limped off in the first half at Villa Park.

Jordan Henderson looks the most likely player to occupy Fabinho's central role, and what he may lack in energy he can probably make up for in terms of experience.

There are also potential issues in the centre of the park for Chelsea, who have lost Mateo Kovacic to an ankle injury and have doubts over N'Golo Kante.

It may be the case that neither midfield is able to dominate and the final could be decided further up the pitch where Liverpool's front three certainly offer the greater threat.

Liverpool's forward line is as powerful as anything on the continent and it could be key to them securing a second piece of silverware this season.

Liverpool have won seven of their last eight matches.