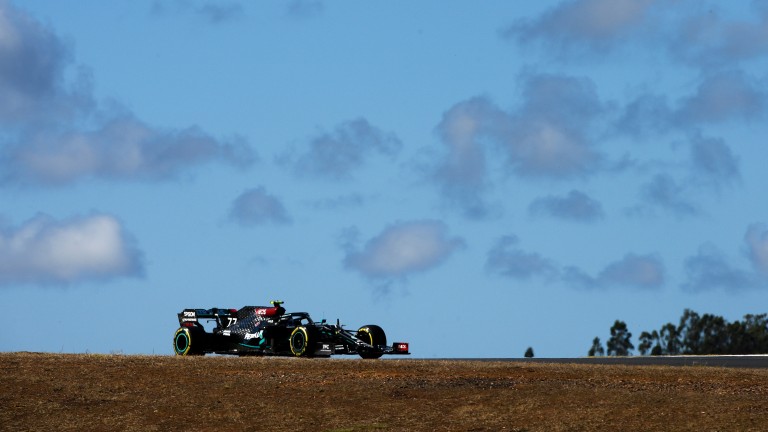 Valtteri Bottas was fastest in practice for the Portuguese Grand Prix
Rudy Carezzevoli/Getty Images
1 of 1
By Phil Agius 10:06AM, OCT 24 2020

Valtteri Bottas got the better of his Mercedes teammate Lewis Hamilton in qualifying for the Eifel Grand Prix last time out and the Finn looks the better value bet for Saturday's showdown at Portimao.

Practice day for the first Portuguese Grand Prix since 1996 proved more eventful than most, with the afternoon session twice red-flagged, first when Pierre Gasly's Alpha Tauri caught fire and again when Lance Stroll and Max Verstappen collided at high speed.

It had been a familiar story at the undulating Algarve course in the morning, though, as Bottas topped the practice one timesheets for the seventh successive race, beating Hamilton by 0.339 seconds.

He was fastest again in the disjointed afternoon session, with Verstappen second and Hamilton only eighth.

The world champion has made a happy habit of putting it all together when it matters most in qualifying, taking eight poles this season to Bottas's three, but Hamilton has drifted to 4-6 to be the fastest qualifier with Bottas looking a reasonable bet at 13-8 to stay ahead.

Red Bull had seemed likely to be a bigger threat to the leading team at this event but they still appear to be working on bedding in their new aerodynamic package and Verstappen's incident will have hampered their preparations.

The battle for third place in the team standings is close and McLaren raised their hopes of a taking a step forward when Lando Norris and Carlos Sainz took third and fifth place in the afternoon, either side of Ferrari's Charles Leclerc.

The Italian team also have some upgrades on their car this week and Sebastian Vettel was a much-improved sixth in the afternoon.