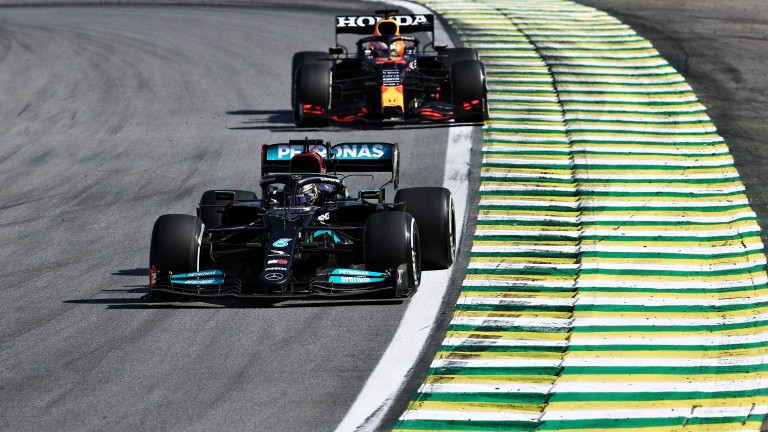 A classic Formula 1 title fight is poised to go down to the wire and bookmakers are struggling to separate rivals Max Verstappen and Lewis Hamilton with three rounds of the season to go.

Going into last weekend’s Brazilian Grand Prix, Verstappen was as short as 1-4 to clinch his maiden championship following decisive victories in successive races in the United States and Mexico.

With the impetus behind him, the Dutchman had been odds-on to bring up his tenth win of the season in Sao Paulo, only for Hamilton to produce one of the great drives of his career to snatch victory against the odds.

The Brit had to overcome a five-place grid penalty for an engine change and being disqualified from qualifying due to his Mercedes breaching rear wing regulations during the weekend, all of which resulted in him beginning Sunday’s race from tenth on the grid.

Hamilton wasn’t to be denied though, as he took the chequered flag for a sixth time this season, Verstappen coming home second as the Red Bull driver saw his lead in the title race cut to 14 points.

The Dutchman remains the favourite for the drivers’ championship at a general 4-5, although SkyBet can’t decide between Hamilton and Verstappen, pricing them both at 5-6.

Bet365 and Betfred go a best-price of evens for Hamilton to win a record-breaking eighth title but he has his work cut out with the driver top of the standings entering the final three races going on to clinch the title in each of the last ten seasons.

The Formula 1 roadshow now heads to the Middle East for the inaugural Qatar Grand Prix, which takes place on November 21, followed by races in Saudi Arabia and Abu Dhabi.

Hamilton is a best-price 4-5 with Hills to maintain the winning touch with victory in Qatar, where qualifying will be vital. Overtaking opportunities look few and far between at the Losail International Circuit, which is more accustomed to staging MotoGP events.

A maiden race around the streets of Jeddah follows before the usual season finale in Abu Dhabi. Verstappen won in the UAE last season but it has traditionally been a Mercedes stronghold, Hamilton winning four of the last seven races.

The Abu Dhabi Grand Prix has decided the fate of the title three times previously, most recently when Nico Rosberg pipped Hamilton to the crown in 2016, and it would come as a shock if this year’s championship battle didn’t deliver enough twists and turns to take it the distance once more.