Max Verstappen could rule in chaotic Grand Prix in Baku 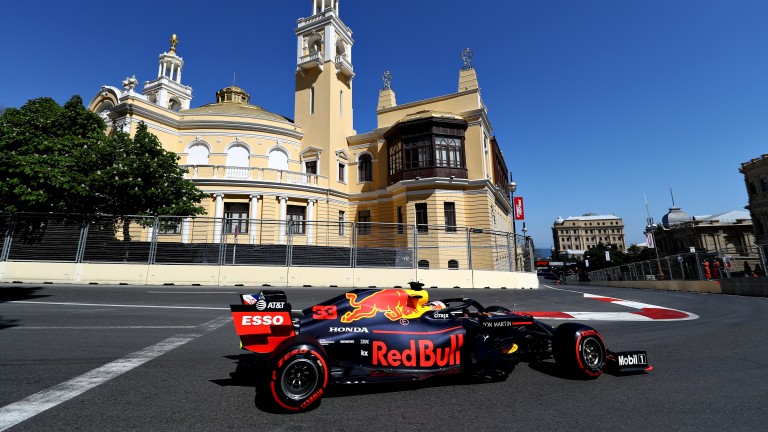 It was the most chaotic qualifying session in recent memory but a familiar front row line up for the Azerbaijan Grand Prix.

Ferrari’s Charles Leclerc ended all three practice sessions on top, but ended his qualifying in the wall.

When the session eventually finished – almost an hour later than scheduled – Valtteri Bottas had claimed his second pole of the year by edging out his Mercedes teammate, championship leader Lewis Hamilton.

Top tip
Max Verstappen 14-1
In both previous races this season where Mercedes have locked out the front row the driver starting second has got the jump off the line and gone on to win.

Bottas is 9-4 and looks better value than Hamilton at 7-4 considering Mercedes have not employed team orders so far this season.

However, this could be a long, crazy race and short prices don't appeal.

With Leclerc out of the way, the road seemed clear for Sebastian Vettel to storm to pole position, but he found himself at the front of the queue for the final qualifying run and unable to use another car’s slipstream to tow him down the huge main straight.

He’ll have no such issue in the race and could easily oblige at 3-1 given the power his Ferrari is capable of producing.

Leclerc isn’t out of it either, despite starting ninth.

The youngster has a notional tactical advantage starting on medium tyres and looked in a class of his own in practice.

His progress could halt when he comes up to Vettel, though, judging by the preferential treatment the German has received from the team this season.

But at a bigger price Max Verstappen makes plenty of appeal from fourth on the grid.

The Red Bull driver has been closer to the pace than might have been expected all weekend, and a power upgrade from Honda seems to have been a success from speed trap figures.

Race pace has always been the team’s strength and fearless Verstappen will give no quarter on this unforgiving track.

Other markets
Toro Rosso double points finish 2-1
Honda’s upgraded engine has also been a boon for Toro Rosso, for whom Daniil Kvyat starts an impressive sixth on the grid.

His rookie teammate Alex Albon was caught out by cooling temperatures in qualifying and ended up 12th, but both drivers were well in the top ten throughout practice.

Albon has won many admirers for his mature approach and he picked up a point in China last time despite starting from the pitlane.

Indeed, there is even talk of a move up to Red Bull if Pierre Gasly continues to disappoint.

So a top-ten finish from 12th on the grid at a track which saw 50 overtakes last year should be well within his grasp.