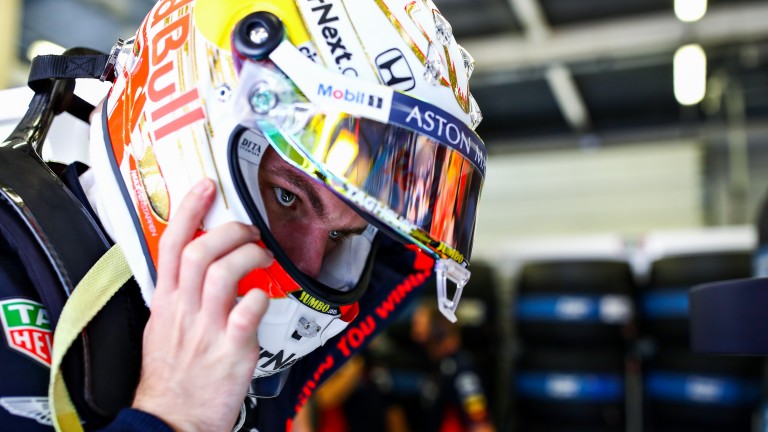 Max Verstappen starts fourth but is aiming to finish a lot higher
Mark Thompson
1 of 1
By Adam Scriven 7:16PM, AUG 8 2020

Seventy years and three months ago a sunny Silverstone played host to the inaugural world championship Formula One grand prix and another sweltering day is in store as Lewis Hamilton bids for an eighth win at his home circuit.

He will have to fight for it after being pipped to pole position by his Mercedes teammate Valtteri Bottas and the weather could contribute to the race becoming a strategic battle.

Softer tyres are in use this week than in the British Grand Prix at the same venue seven days ago. And with that race seeing three tyre failures in the last two laps, including for Hamilton and Bottas, expect teams to err on the side of caution this time.

Racing Point sub Nico Hulkenberg, who only found out he was racing this week on Friday morning, qualified a brilliant third.

The German has started 177 races without standing on the podium - a Formula One record - and he is 3-1 to end that run on Sunday.

Most of the top ten will start on the medium tyres but Max Verstappen, who starts fourth for Red Bull, will begin on hard rubber and that could prove a canny decision.

Practice showed that the softer compounds were wearing out much quicker than anticipated in the scorching heat. The softs were as good as useless while even the medium tyres were showing heavy wear after only ten laps or so.

That means it is likely most drivers will be planning to make two stops to change tyres, but it's possible Verstappen could try to get by with only one.

Whether the gamble works, and whether it will give him enough of an advantage to overhaul the Mercedes is open to question. But the young Dutch charger certainly looks to have the better strategy options and at 12-1 it's worth betting he can halt the Silver Arrows dominant run.

McLaren will be disappointed that Lando Norris starts tenth with Carlos Sainz 12th, but they had a strong race last week and will be expecting to move forward on Sunday afternoon.

Norris finished fifth in the British Grand Prix - his third top-five drive in four races this season - while Sainz would have finished fourth but for a late puncture.

Failing to reach the top-ten qualifying shootout gives Sainz a strategic advantage - he can choose his starting tyres - and both orange cars could well end up picking up points.

At a bigger price in the same market Alpha Tauri are worth a punt.

Pierre Gasly has always enjoyed Silverstone and qualified seventh - the same position in which he finished last week.

Daniil Kvyat has suffered a string of bad luck and the Russian will start 16th after a gust of wind blew him off the track in qualifying.

Kvyat was running just behind Gasly last week when a puncture pitched him into the barriers at high speed. But the car has looked decent in race trim and Kvyat will have his sights set on joining Gasly in the top ten.