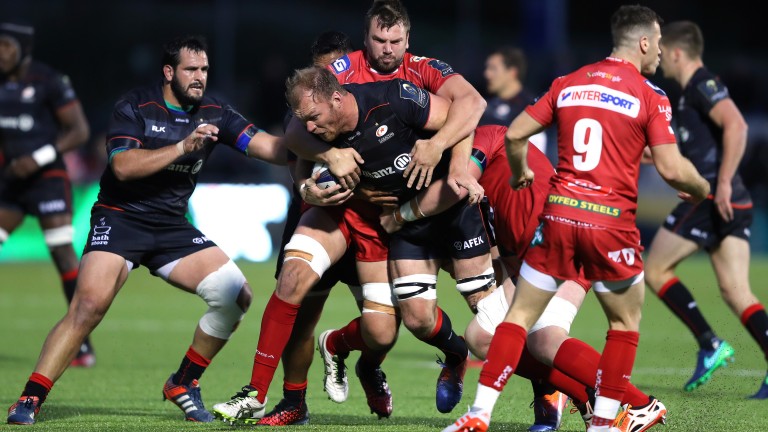 Saracens backrower Schalk Burger occupies the attention of the Scarlets defence in the Champions Cup
Getty Images
1 of 1
By Graham Woods 7:30PM, NOV 19 2016

Saracens have been knocked off top spot in the Premiership this weekend but they have the squad to force their way back by Sunday evening with a comfortable victory at Sale.

The Sharks were solid at home last season, going unbeaten in all competitions until their last match at the AJ Bell Stadium, and in this campaign they’ve seen off Wasps, Leicester and Harlequins.

But they’ve also been turned over at home by Gloucester and lost at Premiership bottom side Bristol last week in the Anglo-Welsh Cup.

They have a stronger side out for today’s clash, with Josh Beaumont, Will Addison and AJ MacGinty returning plus Sam Tuitupou making his first start of the season.

But Sarries, missing at least nine frontline players through international call-ups, injury and suspension, still have incredible experience to call on, with Schalk Brits, Jim Hamilton, Kelly Brown and Schalk Burger in the pack, Richard Wigglesworth and rising star Alex Lozowski in the half-back slots, plus Brad Barritt and Marcelo Bosch in midfield.

Sarries took their eye off the ball a little in the Anglo-Welsh Cup, letting a 25-5 half-time lead slip at Gloucester to lose 36-32 two weeks ago, but that should serve to focus their minds again and the experience in their line-up looks set to make the difference.

Leicester are eight-point favourites at home to Harlequins, who have suffered one single-point defeat in their last six matches in all competitions.