Swafford could also be a contender 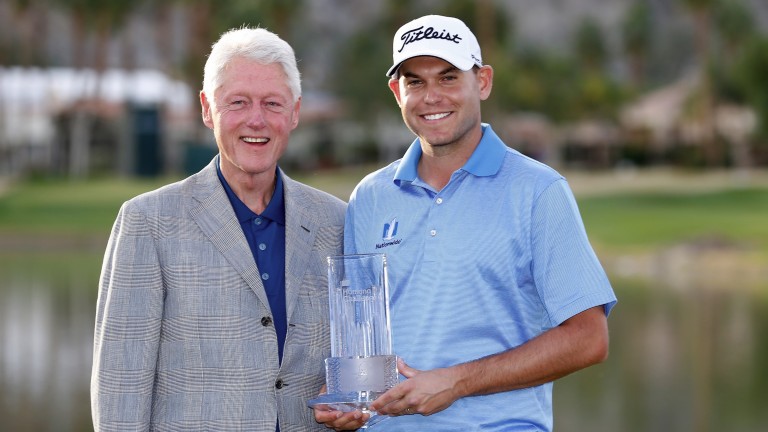 Palmer's top tip
Bill Haas 22-1
The CareerBuilder Challenge looks a perfect tournament for Bill Haas to claim his seventh US Tour title and his first in two years.

Haas made his breakthrough in this event in 2010, reaching 30 under par when it was a five-round affair called the Bob Hope Classic, and his last victory came at La Quinta in 2015 when Humana were the sponsors. A hat-trick could be on the cards on Sunday.

In between his La Quinta triumphs, Haas won the FedEx Cup in 2011, and he has represented his country three times in the Presidents Cup. The 34-year-old is a big fish in a small pond this week and an attractive each-way investment.

The introduction of the Stadium Course and Nicklaus Tournament Course last year made this gathering more of a tee-to-green examination, highlighted by the success of long-game grinder Jason Dufner. Haas, who is also blessed with the ability to churn out fairways and greens, finished in ninth place.

The Stadium Course, in particular, has some dangerous holes, and Patrick Reed, Phil Mickelson, Paul Casey and Jon Rahm are an illustrious quartet who may be too wild off the tee to be trusted for this assignment.

Haas, second in 2011 and sixth in 2014, loves this low-key shootout and knows it is his best chance of further silverware. Prior to the Sony Open, he was in California to practice with his coach, and half of his US Tour wins have come in the Golden State. Four solid rounds for 13th place in the Sony was a fantastic La Quinta warm-up.

Next best
Hudson Swafford 66-1
Another American who tends to hit greens in the right number is Hudson Swafford, who has made 18 cuts in a row and finished alongside Haas in 13th spot in the Sony. The 29-year-old possesses the long-game class to avoid serious trouble at La Quinta.

Like Haas, Swafford headed to California for pre-Sony practice, and the sessions clearly helped. Hotshot Hudson, a winner on the Web.com Tour, is swinging superbly and may soon be ready to make his US Tour breakthrough.

Other selections
Michael Kim 150-1
Whee Kim 150-1
Complete a four-pronged CareerBuilder attack with two over-priced Kims – Michael and Whee. Michael is in his home state and the improving youngster could be ready to show why he was such a star at the University of California. He qualified for the 2013 US Open and finished as low amateur (17th place), a terrific US Tour debut.

Michael muddled through as a rookie in the top grade after graduating from the Web.com Tour, then started the new season in superb fashion with a share of third place in the Safeway Open in the middle of October.

That cheque for $288,000 has cemented his future and the good times are rolling. Kim closed with a 66 for 20th place in the Sony on Sunday.

Whee Kim carded a 63 at the Stadium Course in the 2012 US Tour Q School, matching the course record, so he will be looking forward to his 36 holes on that layout this week.

Whee won his US Tour card back with good golf in the Web.com Tour Finals in September, then had solid form figures of 13-14-27 for his first three events of the US Tour season.

Forgive his lack of birdies in Hawaii last week and chance the promising 24-year-old, a self-taught natural who learned golf by watching YouTube videos of Tiger Woods.

Others to note
Russell Henley
Two-time US Tour champion closed 2016 with tenth place in the RSM Classic and opened 2017 with 13th in the Sony. Talented dangerman, but still testing equipment in wake of Nike's demise.

Kevin Kisner
Almost nailed a 59 in round three of the Sony Open and finished fourth. Form appears to have returned, but he hates poa annua greens and has a poor record on the west coast.

Emiliano Grillo
Class act who finds greens in regulation for fun. Maiden US Tour title came in California (Frys.com Open), but is making his tournament debut.

Zach Johnson
Two-time Major champion was sixth in the Sony on Sunday and is eager to make up for winless 2016. Has never won in California.

Cameron Smith
Rising star played well again in the Sony and has not missed a cut for four months. Australian making tournament debut.

Charles Howell
Money-making machine tied for eighth in the Sony to bank another decent cheque. Lost a playoff for this title in 2013. Winless since 2007 Nissan Open.

Course overview Various layouts have been used for this pro-am through the years, which was previously the Bob Hope Chrysler Classic and a 90-hole, five-day event.

Indian Wells, The Classic Club and Bermuda Dunes were popular courses axed from the four-track roster, then Silver Rock bit the dust in 2012 to allow the event to become a 72-hole, four-day affair under new sponsors, Humana. Last year, two tracks were culled.

The Palmer Private, which hosted 36 holes the previous four years, made way. And the Nicklaus Private also moved aside. The Stadium Course returned after a 29-year absence to act as host, and the Nicklaus Tournament Course made its debut. The event got a new name too, with CareerBuilder taking over as sponsor.

One round will be played at each of the tracks over the first three days, with the cut-makers gathering at the Stadium Course on Sunday. The Stadium Course, designed by Pete Dye, is full of deep bunkers and water, and has similarities to the TPC Sawgrass, while the Nicklaus Tournament is almost 300 yards longer than the Nicklaus Private.

The two newest tracks have plenty of undulation in their greens. La Quinta has become the easiest on the rota. The Stadium Course and the Nicklaus Tournament Course were both used for the US Tour Qualifying School Finals in 2002, 2006 and 2008

Weather forecast Wet and cool for the first two days, before a brighter weekend. Hardly any breeze throughout

Type of player suited to challenge Having a hot putter was enough to contend in this tournament in the past, but the venue changes have put more of an emphasis on ball-striking, underlined by the victory of a greens-in-regulation machine last year.

The two new tracks will not yield as many birdies as the two which were axed. Putting arguably remains most important, but the penalties for errant tee-to-green work are more severe, so strong all-rounders are favoured