Ricciardo could make it a day to remember for Red Bull 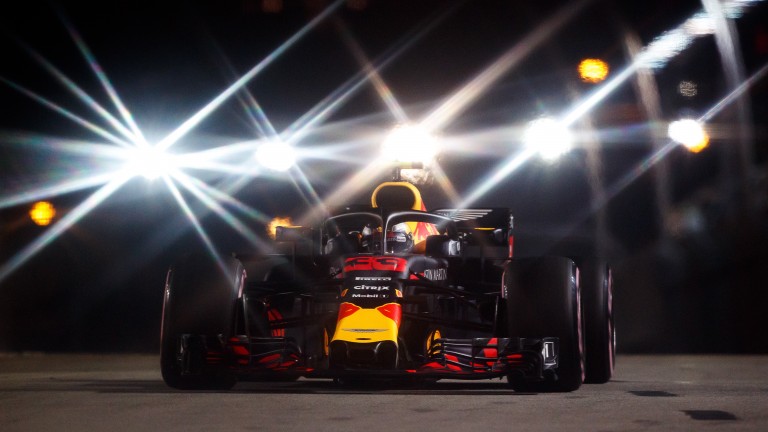 Another race weekend, another champion's performance from Lewis Hamilton.

The Mercedes ace produced a stunning lap to grab pole position for the Singapore Grand Prix while qualifying favourite Sebastian Vettel could manage only third.

Vettel was a 1-2 shot for pole after Ferrari dominated final practice at the Marina Bay street circuit but Hamilton and Red Bull's Max Verstappen shocked the German in the session that mattered.

Trailing Hamilton by 30 points already, Vettel needs to produce something special in the race or his hopes of beating the Englishman to a fifth world title will become even dimmer.

Top tip
Max Verstappen 7-2
Slightly lost in the understandable excitement over Hamilton's pole lap, Verstappen posted a pretty spectacular qualifying performance of his own to line up second.

That was despite having to rectify balance issues from final practice and while dealing with an engine that was not responding as he expected.

Red Bull have suffered numerous reliability problems this season, and that has to be a concern, but the team will get a chance to get rid of the gremlins before the race.

Hamilton's lap - achieved on the first of his two runs in final qualifying - was so good that not even he could get near it on his second attempt and it could well be that the Mercedes is not quite as quick as that lap makes it look.

Verstappen is not in the title hunt, so he has nothing to lose on the run to the first corner, where he flew into the scenery last year following contact with both Ferraris.

Hamilton will be all too aware of that and isn't likely to put up too robust a defence if Verstappen tries a banzai move into turn one.

Red Bull have been hampered at times this year by the fact that the car is too kind to its tyres and unable to get them up to the right temperature to extract maximum performance.

But that could turn into an advantage at Marina Bay, where Ferrari in particular have seen the hypersoft tyres losing performance after only a couple of laps.

If Verstappen can make his tyres last long enough to make one fewer pitstop than the other leaders it will hugely boost his chances of victory.

Other markets
Daniel Ricciardo podium finish 10-3
While Verstappen was delighted with his front-row start, his Red Bull teammate Daniel Ricciardo was left bewildered at qualifying only sixth.

Ricciardo was fastest in the weekend's first practice session and also topped the first segment of qualifying.

However, he bemoaned balance issues similar to Verstappen had suffered in final practice thereafter.

There is pace in the car, which has been quicker in races than in qualifying all season, though.

Ricciardo could find it handling more to his liking with a full fuel load and there is plenty of potential for the Aussie to make a forward move at a circuit which suits the Red Bull better than most.

It has been an up-and-down season for Ricciardo, who has won twice but failed to finish six times.

He likes Marina Bay, though, having finished second there for the last three years, and is a decent bet to keep his podium run in Singapore going.