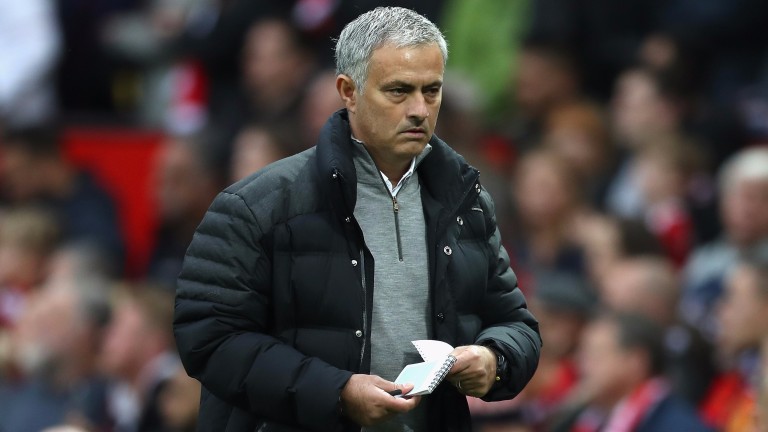 Not many fixtures in English football are as acrimonious as the one between Manchester United and Arsenal and the two grand rivals are ready to do battle again at Old Trafford.

These matches are rarely short on incident, from the league game in 1990 which saw both clubs docked points for fighting to the brutal clash between Ian Wright and Peter Schmeichel, Martin Keown’s celebratory barge towards Ruud van Nistelrooy, and the Gunners’ pizza-throwing episode.

The bitter rivalry between managers Jose Mourinho and Arsene Wenger only adds to the intrigue surrounding this afternoon’s meeting.

Mourinho and Wenger would dearly love to get one over each other, as would the two sets of fans who spent several years going head to head for silverware, but it could end up honours even as the draw looks the best bet.

Emmanuel Adebayor, in 2006, was on target the last time Arsenal won in the Premier League at Old Trafford and Wenger has suffered some truly miserable Manchester defeats with the 8-2 in 2011 the worst of those.

Wenger has every right to believe his squad is now better equipped to deal with a match of this magnitude and the Red Devils have failed to finish above Arsenal since Sir Alex Ferguson retired in 2013.

However, trusting Arsenal to win these big matches does not come easy with the Gunners triumphing just once away to the top ten last season. Five of those nine road trips ended in draws.

Their last trip to Old Trafford in February was a perfect example of Arsenal’s vulnerability in this type of fixture.

United, weakened by absentees, fielded a makeshift defence and gave a league debut to some kid called Marcus Rashford but still won 3-2 in a result that was a huge blow to Arsenal’s hopes of becoming champions.

The title is the ultimate aim once again but Arsenal need to step up on their last show, a 1-1 draw against injury-hit Tottenham in a game where their north London neighbours had more possession and shots on target.

Alexis Sanchez, presuming he is fit to start, is a livewire forward and there is pace to burn with Theo Walcott on the wing and Mesut Ozil pulling the strings but Hector Bellerin’s injury is a major handicap given replacement Carl Jenkinson has struggled.

If Arsenal are easy to pass over at the prices – particularly as Wenger has never beaten Mourinho in a competitive fixture – so too are United.

Ibrahimovic has scored six times in the Premier League and next best for United is Rashford on three but the teenager has not sparkled in recent months.

Rashford has gone ten games without a goal for club and country and Mourinho faces a big call on who replaces Ibra as the main striker.

Wayne Rooney, used on the left against Swansea last time out, is an option for Mourinho, as are Anthony Martial and Rashford but none of them have performed to a high level in a poor campaign by United’s standards.

Sixth in the Premier League and already eight points behind Liverpool, those who put faith in Mourinho making United great again are counting the cost with the former Chelsea boss rarely able to make his tactics work.

United were beaten by Manchester City and hammered at Chelsea with their best Mourinho-style performance coming in a 0-0 draw at Liverpool.

That game showed they can nullify opponents but outside of Paul Pogba they may lack the quality to beat an Arsenal side six points superior in the table.

However, for all of United’s issues under Mourinho, and Louis van Gaal before him, not many teams escape Old Trafford with maximum points. They have lost just two of their 23 fixtures at home since last Christmas.