Chiefs ready to hit their straps for run to the final 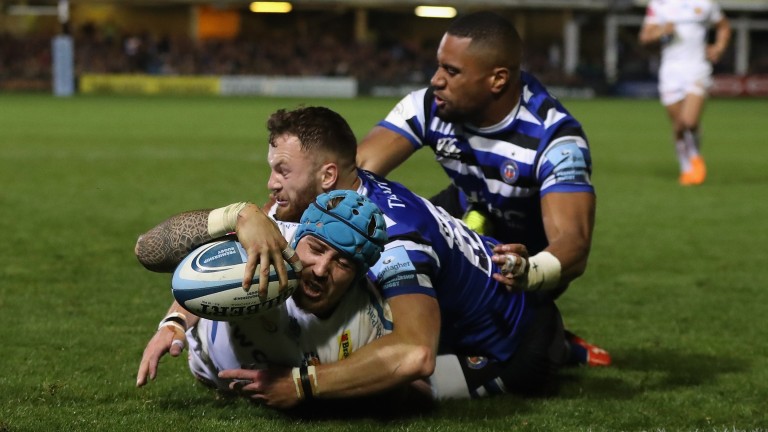 This time last year Saracens went on a run of five consecutive big wins to end the Premiership regular season and rode that wave all the way to the final. Twelve months on, Exeter coach Rob Baxter is calling on his players to emulate that feat.

The Chiefs began round 17 with an eight-point buffer to second-places Sarries, and Baxter was quick to list the reasons why he wants his team to put down a marker, starting with this clash with West Country rivals Bath.

"One, it marks the start of the last quarter of the season," she said. "Two, it’s the end of the Six Nations, so the international lads are back in focus with the clubs and three, it just feels like there is a bit of a change in the weather and that pitches are starting to firm up."

When free-scoring Exeter are charged with putting their foot down, their rival clubs had better take notice. The Chiefs top the scoring charts with 65 tries and have won all seven home league games, garnering a try-bonus point in five of them.

Henry Slade and Jack Nowell return from the Six Nations to the Exeter backline while Santiago Cordero, who has looked such a dangerous attacking weapon and bagged two tries at Worcester last week, remains at full-back.

Bath forced their way into the top half with a tryless 18-9 victory over Saracens last week, and they have been workmanlike and solid if inconsistent.

Since the start of December Bath have lost three of eight matches, all by two points or one, and there was a lot to like about fly-half Rhys Priestland's game management in wet conditions against Sarries last week.

But that is unlikely to be enough if Exeter do hit their straps as their coach is demanding, and a double-figure winning margin looks within the home side's compass.