Chiefs in fine fettle on road 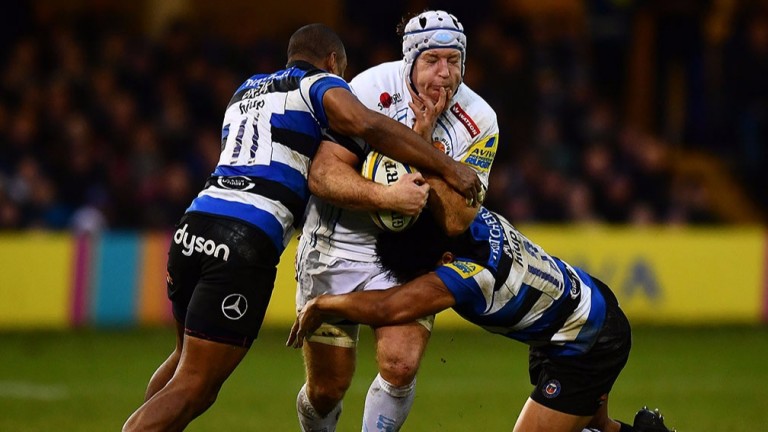 Saracens beat Exeter 28-20 in May’s Grand Final and a wager on them to beat the Chiefs by a margin of between one and 12 points again looks best in the televised Premiership clash at Allianz Park.

The two teams are berthed in the top four and while Sarries stormed away to a 34-13 victory at Sandy Park in September and cruised to a 38-18 success in the regular-season meeting at their Barnet base last term, there will certainly be no complacency. Exeter won 24-20 at Allianz Park in May 2015.

The Chiefs won 17-11 at fellow playoff hopefuls Bath last Saturday, pinching two tries in the last ten minutes to make it four away triumphs on the spin in all competitions. They will also be relaxed about the impact of this game on their efforts in the Champions Cup next weekend as they are extremely unlikely to progress.

By contrast, European kings Saracens will not want to relinquish their position of power in Pool Three with a tired effort at Scarlets next weekend when their final-round visitors are Toulon. Sarries’ last two home league wins (21-6 over Newcastle and 24-20 over Gloucester) have been hard-fought battles too.

Munster will wan to pay tribute to Anthony Foley with a win in their rearranged Champions Cup Pool One match at Racing 92 and their form since the death of their legendary head coach in October has been superb.

However, emotions will be raw and while Racing have lost all three European ties and have mixed up their side as they are in danger of falling off pace in defence of their Top 14 title, it still reflects their standing as runners-up to Saracens last May and Dan Carter is on the bench.

Whether it is an attritional or expansive contest, Munster scrum-half Conor Murray looks a big price for a try.

Murray loves a dart for the line and arriving in support of long-range attacks and has crossed 11 times in the last year for club and country including in Ireland’s historic win over New Zealand.

In the Pro12, Ospreys can give up 13 points to Connacht at the Liberty Stadium and Tommy Seymour is worth an outlay to score a ninth try of the campaign for Glasgow against Cardiff at Scotstoun (BBC Alba & S4C, 7.35pm).

Ospreys have won all six home league games – five by 14 points or more – and while title-holders Connacht prevailed in Swansea last season, they lost 32-11 when the sides met at the Sportsground in September and were beaten 23-7 at Ulster a fortnight ago. Last Saturday’s home slugfest against Munster may have taken a toll on the injury-hit Galway gang too.

Glasgow got into a ding-dong battle when winning at Treviso last Saturday and a similar-style contest is likely against the traditionally attacking but leaky-on-the-road Blues. Seymour dotted down in Italy and has crossed at home against Leinster (four times) and Ulster.