Exeter have the composure to hold off depleted Wasps 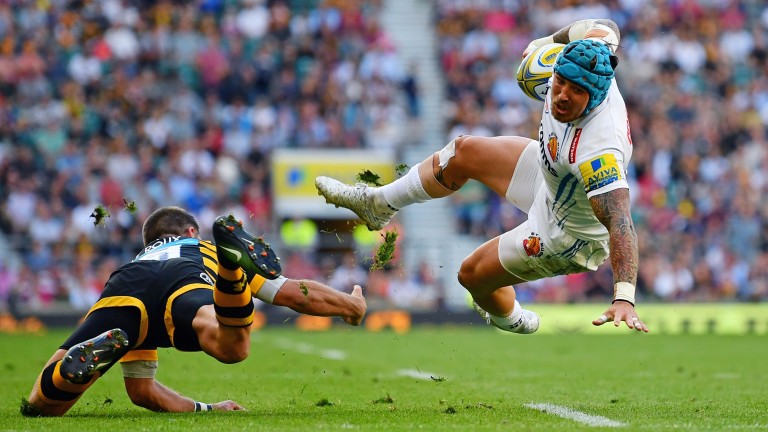 Last season's Grand Final contenders meet again early in the season at Sandy Park and the Chiefs, who won their first Premiership title with an extra-time victory at Twickenham last May, look the value to bank the points in another hard-fought contest.

These teams finished first and second last season and have identical records of two wins and one defeat after three rounds.

Exeter's loss came in round one at Gloucester, and while they have been impressive since, easily covering the handicap and scoring five tries each time in big wins, their opponents have been the bottom two clubs London Irish and Worcester.

Wasps opened up with two wins but neither was a perfect performance, as their defence shipped five tries in a high-scoring game against Sale while they were slow getting into gear at Worcester and laboured their way to a 24-10 victory.

Defeat at home to Harlequins again showed their vulnerable side and a composed Exeter outfit who last lost a home league game a year ago look solid enough to contain a dangerous Wasps attack.

Wasps are without injured fly-half Danny Cipriani so Jimmy Gopperth, who missed out last week with a knock, starts at number ten, while Willie le Roux and Gaby Lovobalavu are also missing from the visitors' backline through injury.

Like Exeter, Northampton have bounced back from opening-day defeat with two victories and they are seven-point favourites at London Irish.

Recommendation
Exeter to win by one to 12 points
1pt 11-5 Coral, Ladbrokes