Yarde can do some damage 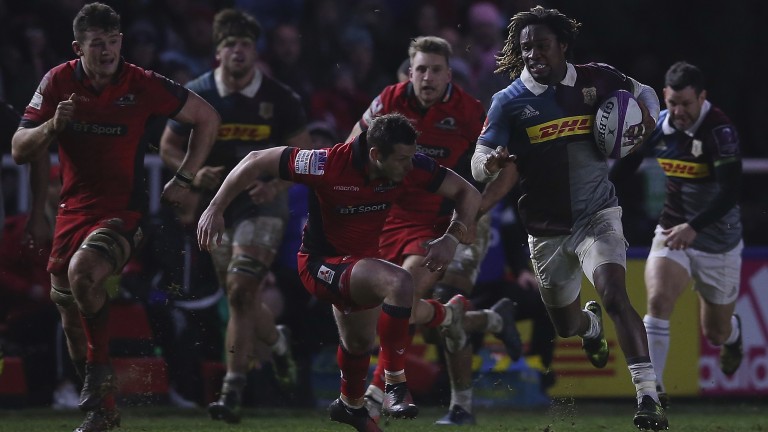 Harlequins look worth a wager with an 11-point start from Bath at the Rec.

Quins have lost only one of their last four league outings to put themselves in the thick of the race for a top-six spot and a European Champions Cup berth next season.

That defeat was 24-17 at Worcester when their injury problems were at their worst and Quins have since claimed wins over Sale and Bristol in the league and last week’s win at Ashton Gate was a 42-8 stroll.

Before the Worcester loss, Quins had triumphed in four of six league games including a 21-20 Stoop success over these opponents.

Indeed, they have become a bogey side for Bath, having won the teams’ last three league meetings and they are bidding to make it four wins on the spin at the Rec.

Taulupe Faletau and David Denton return to make it an all-international backrow for fourth-placed Bath, who bagged a try-bonus success over Northampton last weekend.

But it needed a last-gasp Rhys Priestland penalty to secure a first win in four in the Premiership and Bath’s rookie midfield partnership of Rory Jennings and Max Clark should be tested by an exciting Quins backline.

Munster won 33-0 when they hosted Ospreys at Thomond Park in early November but since then the teams have converged at the top of the Pro12 table and the second game in Sky’s double-header should be the thriller that bookmakers expect.

The Red Army won 20-18 at the Liberty Stadium last season and have won six of their seven away league outings this term, so it looks remiss to ignore the tryscoring claims of right wing Ronan O’Mahony.

O’Mahony has scored in each of his last three games to make it eight for the season in all competitions including a touchdown in Limerick against Ospreys, whose defensive structures may be the less cohesive with 24 players unavailable.

Ulster against Glasgow at the Kingspan Stadium is also an intriguing encounter, and the losing side will probably have to accept they will not make the playoffs.

Ulster are firm favourites after bagging a try bonus in the first half of last week’s home win over Edinburgh while Glasgow slipped to a Scotstoun defeat to the Scarlets. Back Ulster flanker Chris Henry to make it five career tries against the Warriors.

Pro12 holders Connacht can give up 12 points to Dragons at the Sportsground (S4C/TG4, 7.35pm). The Galway gang are picking up fluency after a slow autumn and the Dragons suffered a 45-17 mauling at Munster last week. Four more of the Dragons’ seven away league defeats have been by 13 points or more.

Surprise Top 14 leaders La Rochelle are asked to give up 16 points to visitors Stade Francais in the televised clash (Sky Sports 3, 1.45pm).