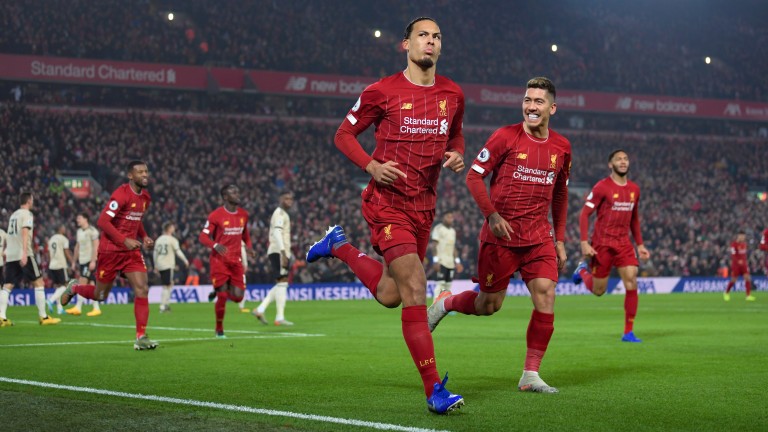 Virgil van Dijk's Liverpool are closing in on the Premier League title
Michael Regan
1 of 1
By Mark Langdon 2:00PM, JUN 18 2020

Armchair Premier League punters should get comfy - there are 90 matches remaining in the Premier League all of which are live on TV - and get ready for an extraordinary conclusion to a season which (hopefully) we will never see the likes of again.

It's difficult to know what to make of the form of Everton and Liverpool heading into this Merseyside derby given the teams have been off for three months, although those of a blue persuasion will be relieved the Reds cannot claim the Premier League trophy at Goodison Park.

A whopping 45 points separate the local rivals in the standings - an enormous gulf made easier to digest by the fact that runaway leaders Liverpool are 22 points clear of next-best Manchester City as well.

However, despite being on the brink of a first title in 30 years, Liverpool went into lockdown with their worst run of results of an otherwise brilliant season.

Jurgen Klopp's men had lost three of their last five matches before being knocked out of the Champions League by Atletico Madrid to end hopes of retaining the European Cup.

Everton's last result was a 4-0 hammering at Chelsea which extended the winless run to three, although the Toffees are unbeaten at home since Carlo Ancelotti's arrival in December.

Fabian Delph and Andre Gomes need to be checked but Everton are definitely without Cenk Tosun, Jean-Philippe Gbamin, Yerry Mina and Theo Walcott.

Ancelotti's love of 4-4-2 is well-known but it could leave Everton outnumbered in midfield, particularly if Gylfi Sigurdsson is once again asked to play in a deeper role that can leave his partner exposed.

Centre-back Michael Keane scored twice in a practice match last week and Ancelotti revealed to Everton's official website that set-pieces will be a major focus following an increase of over eight per cent of goals from such situations in the Bundesliga during the first five rounds since the restart.

Liverpool have failed to win only two of their 29 league games this season so deserve to be strong favourites and it remains to be seen whether the absence of a raucous Goodison faithful will have a major impact on what is a usually feisty derby which has tended to be tight on Toffees turf.

Under 2.5 goals - a bet which has landed in the last five derbies at Goodison - could be the way to go as but the Reds could nick it as tired legs kick in. Liverpool 1-0.