Evans may have met his match with Tomic

Brit's Aussie run may be coming to an end 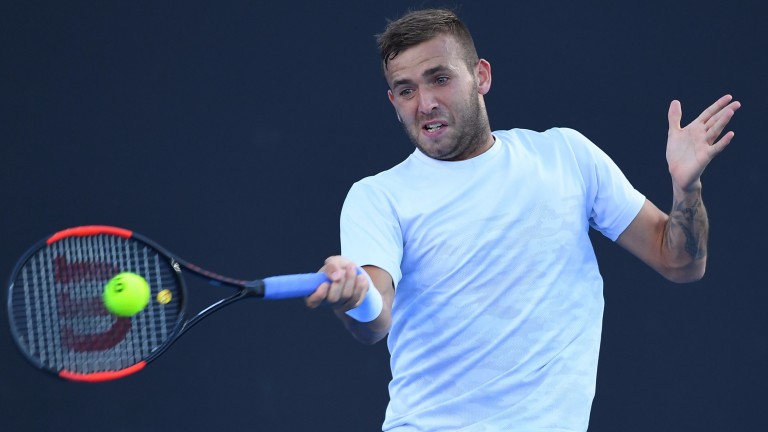 Evans v Tomic
There was a doubt if Dan Evans would ever better his run to the third round of the US Open in 2013 when he outplayed Kei Nishikori and Bernard Tomic on his way to the last 32 in New York.

But the Birmingham battler may have exceeded that effort in recent weeks by reaching the final in Sydney last week, beating Dominic Thiem in the last eight, and fighting back to defeat Marin Cilic 3-6 7-5 6-3 6-3 to progress to round three of the Australian Open.

No wonder the oddsmakers are respecting Evans, but he may find posting a second victory over Tomic in three matches tough to achieve. Evans will scrap for all he’s worth and there are no problems regarding his temperament.

But it’s just possible that Tomic, who is also aiming to take a sizeable step forward in the Grand Slams, has become value to oust the Briton.

Tomic failed to dump Victor Estrella Burgos in straight sets yesterday, winning 7-5 7-6 4-6 7-6, but it may be too soon to start picking holes in the performance of a player who looked good enough to go close to landing this title when he was a teenager.

It could be that world number ten Berdych is ranked seven spots about Federer, it could be that Berdych took no prisoners in his clash with Ryan Harrison, or it could be that the layers weren’t impressed by the Swiss legend dropping a set against Jurgen Melzer and then being fairly tested by promising Noah Rubin.

There have been occasions when Berdych has deservedly beaten Federer, but it may pay punters to look at the bigger picture.

Federer’s game looked in good order in the Hopman Cup, despite his loss to Alexander Zverev, and if anyone needed any further incentive to support the former world number one he upended Berdych in three sets at Melbourne Park last year.

Lacko v Nishikori
Kei Nishikori is playing pretty well judging by his victories this season over Jordan Thompson and Stan Wawrinka in Brisbane and Jeremy Chardy in his latest outing in Melbourne.

But the Japanese ace also lost to Grigor Dimitrov in Brisbane and was taken to five sets by Andrey Kuznetsov this week, so punters should maybe try to keep an open mind about Nishikori.

He will probably take Lukas Lacko, his next opponent, by storm but is not as certain to do so as the bookies’ quotes imply.

Lacko has been a huge under­achiever in his career, but there have been signs the Slovak may be addressing that problem judging by the way he fought back to dismiss Dudi Sela 2-6 6-3 6-2 6-4 in the last 64.

The likelihood is that once Lacko steps on court against a top player like Nishikori, he will return to type and crawl back into his shell.

But he has the ability to trouble anyone in the sport and if the self-belief is on the up he could cause Nishikori more problems than layers expect.

Svitolina v Pavlyuchenkova
Observers are right to get excited about the progress Elina Svitolina is making, but it would do a disservice to Anastasia Pavlyu­chen­kova to ignore her chances in what could prove a high-class clash.

Pavlyuchenkova may be nearing the level needed to claim a first Grand Slam singles crown and an interest on the Russian to win at least a set can be had.