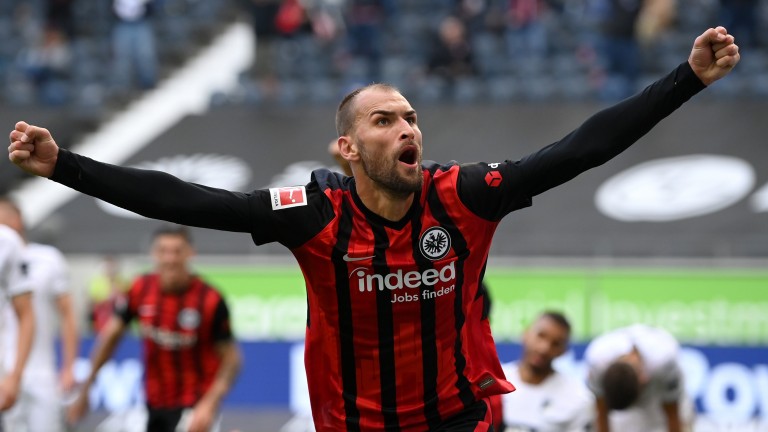 Eintracht Frankfurt boss Adi Hutter is under pressure to make changes to his system but with or without tweaks the Eagles should be able to triumph at Stuttgart.

Hutter's side are without a win in a month and there have been calls for the boss to ditch his favoured 3-5-2, yet there don't seem to be obvious grounds for panic.

They've played three times since beating Hoffenheim 3-1, drawn with Cologne and Werder Bremen (and should have won both games) and won't be the only side to be thrashed at Bayern Munich.

They are on nine points, boast as lively a front three as any in the league in Bas Dost, Andre Silva and Daichi Kamada, and brilliant flyer Filip Kostic is fit again.

Stuttgart, like Frankfurt, are on nine points but haven't won any of three at home this season and their two wins have come against bottom-five clubs Hertha and Mainz.

Hertha Berlin snapped a four-game losing streak with a point against Wolfsburg last week and are due some luck – it's worth betting they'll get it at Augsburg.

Hertha have played three away games this season, winning 4-1 at Werder Bremen and then suffering a pair of agonising defeats at Bayern Munich and Leipzig, beaten by late penalties each time.

Bruno Labbadia's side will start climbing the table soon and should be confident of success at Augsburg, who were themselves without a win in three before running into Mainz last weekend and that's pretty much a free victory this season.

The other price in Germany which catches the eye is Union Berlin at a shade of odds-on at home to free-falling Arminia Bielefeld. Union, 3-1 winners at Hoffenheim last weekend, are flying while Bielefeld have lost four in a row.

Two of those – skipper Hilton and central midfielder Damien Le Tallec – are sitting out proceedings once again as their teammates head for Bordeaux, one of France's true fortresses.

Les Girondins aren't simply unbeaten in five home matches, they haven't even conceded a goal and they represent a far bigger threat to Montpellier than St Etienne, who are on a crippling losing streak.

Bordeaux' last two home matches have yielded a 2-0 win over Dijon and a 3-0 drubbing of Reims and with their defensive fortitude one goal might be all it needs to take care of Montpellier.

In Spain, Eibar's last two road trips have ended in wins at Valladolid and Sevilla so they should have nothing to fear from a trip to the Alcoraz to take on Huesca. The hosts are still awaiting a first win, struggling to score goals and conceding too many.