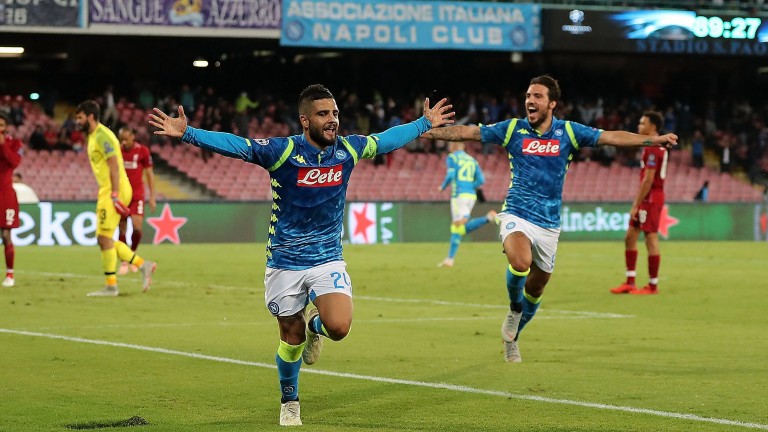 We are not yet at the stage where teams from outside England are concerned by the potential Premier League dominance, but they may be more worried after this season's Champions League because holders Liverpool are fancied to repeat last term's success.

English teams have had a financial advantage for a number of years and the old theory from abroad was that they could have all the money but a lack of strategy would hinder Premier League clubs.

You could argue the planning is still not perfect but the arrival in England of great coaches including Pep Guardiola, Jurgen Klopp and Mauricio Pochettino has made the difference.

That was the case last year with all four Uefa finalists representing Premier League teams and at the odds Liverpool are the best bet.

It would be easy to look at this Liverpool side and think they have made the same mistake Real Madrid did when they won the last of their European Cups by not investing in the future as the team got that little bit older.

However, Liverpool's squad looks fine to me and if anything their results this season have been underrated compared to the noise made about Manchester City's early-season performances.

Fabinho and Naby Keita should improve for a second year at Anfield and Sadio Mane was able to pick up the goalscoring slack when Roberto Firmino was injured last season.

Liverpool are settled whereas so many teams high up in the betting market - Real Madrid, Barcelona, Bayern Munich, Paris St-Germain and Atletico Madrid - are in transitional years.

City are favourites with bookmakers, although I want to see them deliver in the important part of this competition before I start believing they are the real deal in the Champions League.

Luck has definitely played a part in Guardiola's relative Champions League woes since he departed Barcelona, most notably at Bayern Munich with those three semi-final defeats which were used as a stick to beat him with when he first arrived in Manchester.

I have a certain amount of sympathy with Pep, particularly as the defeat to Atletico Madrid was undeserved and they had a stack of injuries when going out to Barcelona.

With City, however, he has definitely been guilty of over-thinking his team selection in big Champions League matches, so I would swerve them at the odds. Napoli offer punters a more attractive proposition.

Carlo Ancelotti knows how to win this competition and Napoli were cruelly knocked out at the group stages last season, finishing third behind Liverpool and Paris St-Germain.

They were the best team in the group before blowing it on matchday six and the rest is history as far as Liverpool are concerned.

This group is easier with Liverpool again but no PSG lurking and the Italians will be interesting challengers in the knockout phase.

Because Barcelona are so strong in La Liga it goes unnoticed that they are in transition. But it is certainly the case.

The questions surrounding Barca are not new ones. Coach Ernesto Valverde has been heavily criticised for his management in the defeats to Roma and Liverpool in the last couple of years, but they have lacked athleticism and stamina going way back to the Guardiola days.

I remember being at the Emirates in 2010 when Arsenal came from two down to draw and I have never been at a game where one team had totally played opponents off the pitch by such a wide margin and still not won.

They lack fortitude and I also find it difficult to see Zinedine Zidane maintaining his incredible run of Champions League triumphs.

Real Madrid have not made enough signings to strengthen their starting 11 and opening up away to Paris St-Germain is not what they need.

Remember when Ancelotti took a beleaguered Bayern to Paris and was battered 3-0? He got sacked the next day!

PSG are more interesting contenders. They are in much better shape than last year thanks to the arrivals of Abdou Diallo, Keylor Navas, Ander Herrera and Idrissa Gueye.

They are not Galactico arrivals or dream signings but players they needed to improve the team, and when you add Mauro Icardi in the mix they won't even have to play decent football to score goals.

Angel Di Maria has been brilliant for Paris and they have Neymar, Kylian Mbappe, Icardi and Edinson Cavani. Don't rule them out and it would be an amazing story if Neymar, after a whole summer of wanting to leave for Barca, suddenly took PSG all the way to European glory.

Juve are not on my shortlist despite having Cristiano Ronaldo.

Maurizio Sarri has no Champions League pedigree so this is a step up for him as he looks to change the playing style, while the dressing-room atmosphere will be difficult to manage.

Emre Can and Mario Mandzukic have been left out of their Champions League squad, Paulo Dybala will never be seen as integral as long as Ronaldo is around and Matthijs de Ligt needs time to settle.

De Ligt will be great but look at how Fernando Llorente roughed him up in last season's Champions League semi-final. The long-term injury to Giorgio Chiellini is a big problem as they try to ease De Ligt in.

Atletico's turnover of players makes them difficult to judge.

We have already seen them win a couple of different ways already in La Liga this season and Joao Felix adds creativity but we won't know until two-thirds into the season what Diego Simeone is truly working with.

Most of the Champions League groups should finish in betting order with a clear one-two in many of them.

Real Madrid and PSG should come through in Group A, likewise Bayern and Spurs in Group B. I don't anticipate any upsets for Juve and Atletico in Group D, nor Liverpool and Napoli in Group E.

Even Group F should go the way of the betting with Barca and Dortmund fancied to overcome Inter, whose manager Antonio Conte has much to prove in the Champions League.

Leipzig, who have the best young defence in Europe, and Lyon can justify their positions as first and second in the market in Group G, which leaves two sections to find the shocks.

Shakhtar can pip Atalanta to second spot in Group C. This is new territory for Serie A surprise package Atalanta, while old hands Shakhtar have made a smart signing in Yevhen Konoplyanka.

Group H is ripe for an upset with home bias surely impacting on Chelsea's price and Valencia having issues off the pitch following the sacking of coach Marcelino and with scoring goals.

Ajax lost a couple of key men in De Ligt and Frenkie de Jong but they maintained much of what took them to the semi-finals last season and Lille are going to defend well under Christophe Galtier, who could be the best coach in the group.

They have sold Rafael Leao to Milan and Nicolas Pepe to Arsenal but Victor Osimhen has been on fire and Jonathan Ikone scored for France on his international debut against Albania.