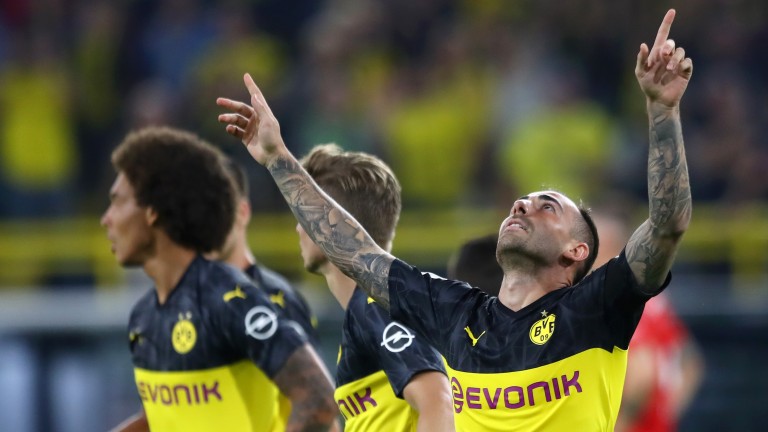 Paco Alcacer can lead from the front for Borussia Dortmund in their Bundesliga opener
Martin Rose
1 of 1
By Liam Flin 2:08PM, AUG 16 2019

Borussia Dortmund took the Bundesliga title race to the final day for the first time since 2010 last season and can start their pursuit of top spot with three points against Augsburg.

Alfred Finnbogason, Marco Richter, Florian Niederlechner and Michael Gregoritsch provide the Bavarians with plenty of firepower and they should breach Die Schwarzgelben, who they beat in the reverse fixture last term.

Dortmund have a backline in transition following the signings of Nico Schulz and Mats Hummels but their embarrassment of attacking riches can see them build on a league-high of 14 home wins last term.

Werder Bremen finished only five points off the top four in the Bundesliga last term and can make an emphatic start at home to Fortuna Dusseldorf.

The visitors lost their two top goalscorers from last season this summer in Dodi Lukebakio and Benito Raman and are not particularly sharp at the back.

Only the bottom four clubs conceded more than tenth-placed Dusseldorf in 2018-19 and the team's defensive vulnerabilities were put under the microscope in a 7-1 annihilation by Eintracht Frankfurt.

Pamplona is a tough place to visit for any Spanish side but Osasuna do not travel well and could lose their opener away to Leganes.

The newly-promoted outfit won only seven of their 21 matches on the road last term and could be outclassed by Los Pepineros, who have made Kenneth Omeruo’s loan deal from Chelsea permanent and snapped up wide player Jonathan Silva.

Metz were comfortably the best side in France's second tier last term and they can continue their good start to life in the top flight against wounded Monaco.

The hosts have done well to maintain the bulk of their squad following promotion and have added Chelsea Under-23 star Victorien Angban to their ranks on a permanent deal.

They held Strasbourg 1-1 in their first match of the season and could unsettle Leonardo Jardim's men, who were battered by Lyon in the season's curtain-raiser.