European dream could be about to die for Dundalk

Hosts likely to be too strong for Lilywhites 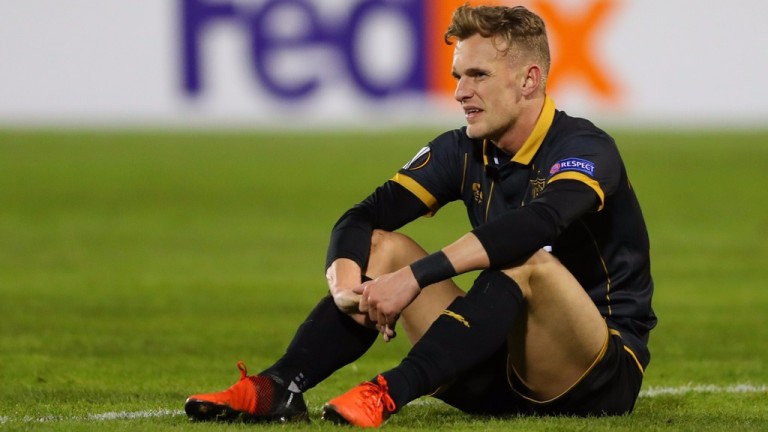 Dundalk have been unable to add to the four points achieved in their opening two Europa League group-stage games and are likely to exit the competition with a defeat to Maccabi Tel Aviv in Israel.

The qualification race remains wide open in Group D with second-placed AZ Alkmaar on five points and Dundalk and Maccabi just a point worse off.

Anything other than a home victory for AZ over group winners Zenit St Petersburg would open the door for Maccabi or Dundalk to climb into a qualification slot. And if AZ were to lose the game, Dundalk would need only a draw to seal a passage to the last 32.

Sadly for Dundalk they have struggled to build on their fine start and make no appeal despite being 15-2 to win the game.

Maccabi have responded well to a slow start and are justifiably 1-2 favourites to win on home soil and tempting 5-4 shots to be leading at half-time and full-time.

Dundalk manager Stephen Kenny will be asking for one last effort but they lack match sharpness having been starved of competitive football since a 1-0 extra-time defeat to Cork in the Irish Cup final in November.

The Irish league season finished in October and back-to-back Europa League losses have followed with Dundalk going down 2-1 away to Zenit and 1-0 at home to AZ.

To their credit the Lilywhites have not lost any of their Europa League games by more than one goal but the last task may prove to be the toughest with Maccabi gearing up to produce a big performance.

Maccabi posted four successive home wins in the qualifying rounds and were good enough to lead Zenit 3-0 on matchday one before an amazing fightback from the Russians, who went on to win 4-3.

Shota Arveladze’s side are usually more solid at the back (they have kept three clean sheets in their last six games) and if they get their noses in front it may be tough for Dundalk to respond.