Bristol Bears and Cardiff Blues look the teams to beat 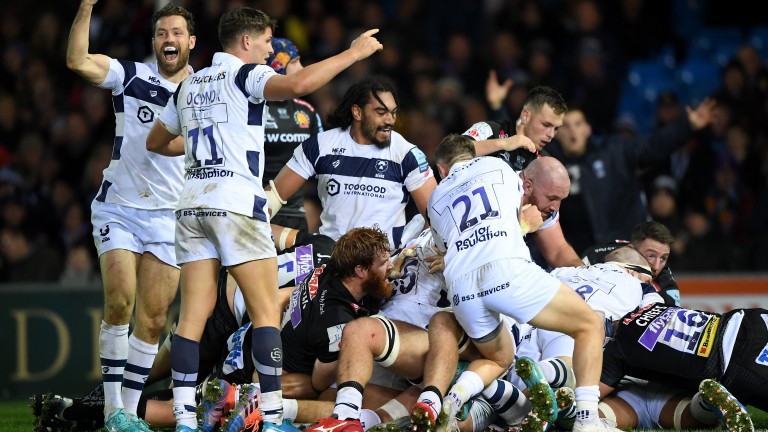 Bristol and 2018 winners Cardiff Blues look the best-value each-way bets to claim the European Challenge Cup in Marseille next May.

The Bears are building solidly on last season’s fine first campaign back in the Premiership, when they finished ninth in the league and also made the quarter-finals of Europe’s secondary competition only to again run into their pool winners La Rochelle, the eventual runners-up.

They top the Premiership on points difference after three wins out of four including a stirring comeback success at Exeter on Sunday and while they are out of the Premiership Cup, they won both their home games against Gloucester and London Irish.

Head coach Pat Lam knows how to plot a trophy-winning campaign - he led Connacht to the Pro12 title in 2016 - and Pool 4 looks a winnable section with 2017 kings Stade Francais currently at the foot of the Top 14 table.

Stade are not full-on struggling but they won’t want to be cut adrift. Two seasons ago they were knocked out in the quarter-finals and last season they finished bottom of a section also containing Worcester, Ospreys and Pau.

Brive are one of the teams just above Stade in the Top 14 table so safety should come first while Zebre are winless after six games in the Pro14 and conceded 50 points or more in each of their first three games.

Ashton Gate will be a bubbling cauldron for a knockout game and Charles Piutau, Nathan Hughes and Alapati Leuia bring star quality to an outfit who prides themselves on their set-piece.

The Blues pepped up their season with a home win over the Cheetahs on Saturday but canny head coach John Mulvihill will probably accept that a tilt at the Pro14 playoffs is unlikely now and focus his immediate attention on another decent European adventure.

Cardiff have won five of their six pool games in three of their last four Challenge Cup campaigns and their run to the trophy in Bilbao, where they rallied from 20-6 down at the break against Gloucester to prevail 31-30, contained group games against Toulouse, Sale and Lyon before they won at Edinburgh and at home to Pau.

Pau and Leicester are fair adversaries for the Blues in Pool 5. However, Pau’s fine start to the Top14 season means they are in the mix for a playoff place and that could prove their priority, while the talk out of the Tigers’ camp is of their first Challenge Cup campaign as a pleasant distraction from the rigours of the Premiership, in which they are struggling again. Leicester boss Geordan Murphy knows league points matter more, though.

French heavyweights Toulon head the betting lists at 5-1 but they are in a pool that promises to provide some titanic struggles with Bayonne, Scarlets and even London Irish.

Wasps, Edinburgh and Bordeaux are a top-notch trio in Pool 3.

Worcester and Castres look the likeliest to progress from Pool 2 but both may well have domestic survival on their minds in the new year.