Fleetwood and Molinari lead the way 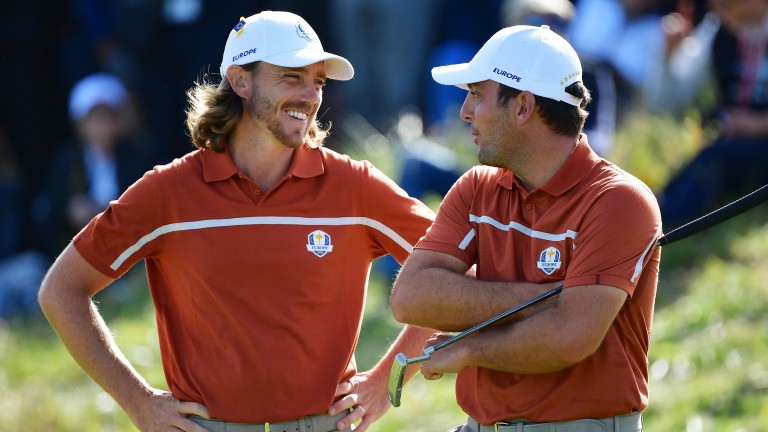 Europe have taken full control of the Ryder Cup at Le Golf National, Paris, moving into a 10-6 lead after two days, becoming general 1-6 favourites with just the Sunday singles remaining.

The hosts led 5-3 after day one and repeated the same scoreline in the second set of fourballs and foursomes, the Saturday dominance started by Rory McIlroy and Sergio Garcia winning the opening match of the morning.

McIlroy and Garcia saw off Tony Finau and Brooks Koepka in the first fourballs contest, Paul Casey and Tyrrell Hatton registered their first point of the week by beating Dustin Johnson and Rickie Fowler, then the stars of the European campaign – Francesco Molinari and Tommy Fleetwood – secured their third point in tandem by crushing Tiger Woods and Patrick Reed.

Jordan Spieth and Justin Thomas were the only Americans who managed to defy the morning surge from Europe – the Major-winning duo beat Ian Poulter and Jon Rahm to salvage something from the session for the visitors.

From 8-4 down, the United States needed fireworks in the foursomes – a session they lost 4-0 on Friday – and life did not get any easier for Jim Furyk's side.

Henrik Stenson and Justin Rose, fresh from being rested, were in no mood to give an inch against Koepka and Johnson in the opening foursomes, and the Molinari-Fleetwood dream team continued their glorious week by beating Woods and Bryson DeChambeau 5&4.

Woods, who won the Tour Championship last Sunday amid joyous scenes, has come crashing straight back down to earth. The 14-time Major champion has played three matches this week and failed to put anything on the board for the Stars & Stripes.

As Tiger trudged to the clubhouse, Molinari and Fleetwood feasted on adulation, the Open victor and the Race to Dubai champion enjoying life as the competition's top scorers with four points apiece.

As Molinari and Fleetwood conducted their post-match interviews full of beaming smiles, the two matches remaining on the course went the way of America, keeping alive the hopes of Furyk and the 12 men who started the event as 10-11 favourites.

Bubba Watson and Webb Simpson beat Garcia and Alexander Noren, then the fired-up pairing of Spieth and Thomas, who were alongside each other through all four sessions, enjoyed a comfortable 4&3 success over McIlroy and Ian Poulter.

The Sunday singles draw was announced last night with a mouthwatering opening encounter between McIlroy and Thomas.

Jon Rahm versus Tiger Woods in match four is another clash of the titans, while Ian Poulter versus Dustin Johnson (match six) should be another quality Ryder Cup joust. The draw line-up is encouraging for European captain Thomas Bjorn – his team could win the singles 7.5-4.5 and deliver an emphatic 17.5-10.5 outright triumph.

Punters should consider backing Rahm to beat Woods, who has found following up his Tour Championship heroics of last week too much of a challenge. Woods has had a hectic schedule in the last couple of months and the Ryder Cup may have been one tournament too far for the 42-year-old legend.

Woods stepped straight on to the plane to Paris from East Lake, where he was victorious last Sunday, and there were signs during the first day of competition at Le Golf National that his vulnerable back has not enjoyed the trip. Woods has been well below last week's standard, is winless in three matches, and suffered a demoralising two matches on Saturday.

Rahm is pointless, too, but he has had only two bites of the cherry and has played better, and the Spanish beast will be relishing the chance to take on Tiger in front of a supportive crowd.

Everything is going the way of the home side and this is a big chance for Rahm to ride the crest of the European wave. Woods probably already has one eye on the plane home.

Molinari and Fleetwood are impossible to catch in the top European market – one or both of the Italian and the Englishman will end the event as their team's most productive player. Garcia, McIlroy, Rose and Stenson are tied for third place on two points apiece.

It is a similar story in the top American market, another two-runner heat. Spieth and Thomas are tied on three points apiece, with the next-best players on only one point.

The final day of action is set to unfold under more blue sky. Blazing sunshine and light breezes are expected for the denouement. The United States, who can be backed at 17-2 for Cup glory, have not overcome a four-point final-day deficit since Brookline in 1999. Europe did it in 2012, conjuring the famous Miracle of Medinah from 10-6 behind.