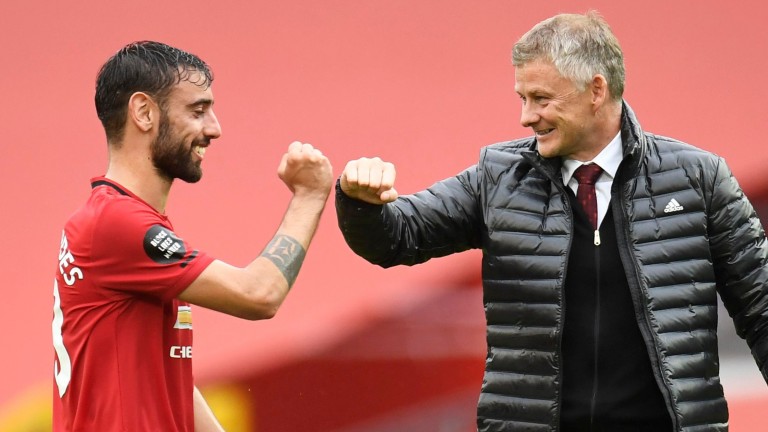 Manchester United should be celebrating victory in Spain
Getty Images
1 of 1
By Dan Childs UPDATED 10:11AM, APR 8 2021

There is plenty of Premier League interest in the Europa League quarter-finals with Arsenal taking on Czech champions Slavia Prague at the Emirates and Manchester United locking horns with La Liga opponents Granada in Andalusia.

In the other last-eight clashes Ajax will be looking to establish a first-leg lead at home to Roma, while Dinamo Zagreb face off with Unai Emery's Villarreal in the Croatian capital.

Bets to be placed by 6pm

The 2019 Europa League final was an all-English affair and there is a good chance of a Premier League presence in Gdansk next month as both Arsenal and Manchester United look capable of quarter-final first-leg victories against Slavia Prague and Granada.

Elsewhere Lyon can advance to the French Cup quarter-finals with an away win at third-tier Red Star and Scottish League One strugglers Dumbarton could be plunged into deeper trouble by a defeat at home to mid-table East Fife. The fourfold pays more than 5-1 with Hills.

Manchester United have posted away victories over Sociedad (4-0) and Milan (1-0) in the Europa League knockout stages and should be too strong for La Liga hosts Granada, who have lost their last three matches.

Arsenal were woeful in their 3-0 loss at home to Liverpool on Saturday but they can respond with a high-scoring victory over injury-hit Slavia Prague, who have travelled to north London with only one recognised central defender.

Best bet
Arsenal to win and both teams to score

Manchester United have racked up 15 away wins in all competitions and look a solid bet to overcome Europa League debutants Granada, who may be short of confidence after last Saturday's 3-0 La Liga loss at home to Villarreal.

Depleted Slavia Prague are going line up at the Emirates with a makeshift defence and a backup goalkeeper (first choice Ondrej Kolar is absent) and their deficiencies could be seized upon by Alexandre Lacazette, who has notched three times in his last six appearances.

Manchester United have lost just one of their last 14 away fixtures.