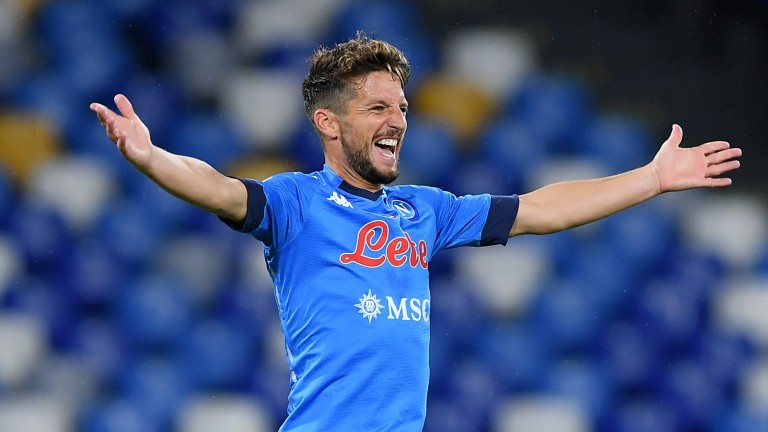 Dries Mertens is among a number of high-quality attacking options at Napoli's disposal
Francesco Pecoraro
1 of 1
By Liam Flin 6:18PM, DEC 9 2020

There are plenty of dead rubbers taking place on matchday six of the Europa League but there is still all to play for in Group F with Napoli hosting Real Sociedad in the headline fixture.

Both sides and AZ Alkmaar, who take on Rijeka, are still in the running for qualification to the knockout stages and a tight affair is expected at the Stadio Diego Armando Maradona.

Hosts Napoli were outplayed by Real Sociedad in the reverse fixture but sat back, soaked up pressure and scored the only goal of the game through Matteo Politano to snatch maximum points.

And with the Italians requiring only one point to seal a spot in the last 32, a similar plan is expected on home soil.

Only this time Real Sociedad will be missing two crucial creative outlets in veteran David Silva and Mikel Oyarzabal, this season's top scorer in all competitions with seven goals.

The Basque side have not been in the best of form anyway, failing to win any of their last four matches against AZ Alkmaar, Villarreal, Rijeka and Alaves and their early-season success seems to have petered out.

Napoli, meanwhile, have shown great defensive resolve with three wins to nil in their last four fixtures and even without Victor Osimhen, they can still pose a threat on the counter-attack with Lorenzo Insigne, Hirving Lozano and Dries Mertens, who could return to the starting line-up. They are a great bet to prevail.

Hoffenheim have had a much easier time of it in Group L with four wins and a draw from their five matches and with qualification confirmed, they can romp to victory against sorry Gent.

The Belgians have lost all five of their group matches, scoring only three goals and shipping 11 times, and their Bundesliga opponents look worth a bet giving up one goal on the handicap.

The recent resurgence of Ihlas Bebou has shown Hoffenheim have goals beyond main man Andrej Kramaric and even a rotated unit should run out comfortable winners.