Cavani can lead the way for United 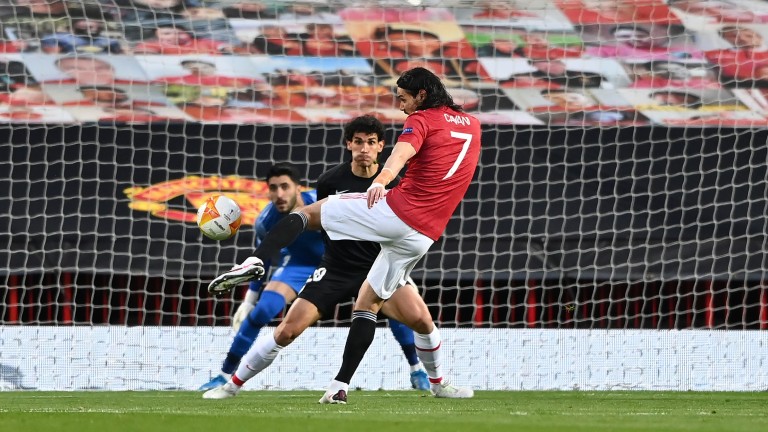 Manchester United's magnificent midfielder Bruno Fernandes is a warm favourite to cap off a superb season with a man of the match award in the Europa League final against Villarreal but he could be upstaged by centre-forward Edinson Cavani, who is finishing the season in superb style.

Fernandes has been outstanding since signing for the Red Devils in January 2020 – contributing 26 Premier League goals and 19 assists – and has done more than any United player to get the club back into contention to compete for major honours.

However, he would be the first to admit that United are not a one-man team and there are plenty of other candidates who could play a match-winning role.

Marcus Rashford finished second in United's scoring charts with 11 league goals (the third successive season he has reached double figures) despite being hampered by shoulder and foot injuries.

But the bigger threat to Villarreal could come from Cavani, who is playing as well as ever despite turning 34 in February.

Cavani has had an illustrious career but has never won a major European trophy and will be desperate to put that right by nudging United towards glory in Gdansk.

He was the main man in the semi-final against Roma – scoring twice in each leg – and should be full of confidence after his superb strike in last Tuesday's 1-1 draw at home to Fulham.

Villarreal manager Unai Emery will have a plan to stop Cavani, who was his centre-forward at Paris St-Germain from 2016 to 2018, but the sheer class and quality of the Uruguayan could make him impossible to contain.

Villarreal's 2-1 aggregate semi-final success over Arsenal was a tactical triumph which emphasised the togetherness and tenacity of Emery's team, but there were occasions when players overstepped the mark and midfielder veteran Etienne Capoue was the main culprit with his pair of yellow cards in the opening leg.

Capoue's dismissal ruled him out of the second leg starting line-up at the Emirates, but he has been a key component of the side since his January switch from Watford and can expect to return to the team at the expense of Francis Coquelin.

Facing United is unlikely to faze Capoue, who will have played against them regularly over a seven-year career in the Premier League with Tottenham and Watford.

But Capoue was a regular name in referees' notebooks and topped the 2018-19 Premier League bookings chart with 14 yellow cards.

Given his history of indiscretions and the difficulty of his role – which involves trying to get to grips with Fernandes and Paul Pogba – he looks a probable card magnet in the final and may be the first to persuade French arbiter Clement Turpin to reach for his pocket.

FIRST PUBLISHED 4:35PM, MAY 25 2021
Cavani was the main man in the semi-final against Roma – scoring twice in each leg