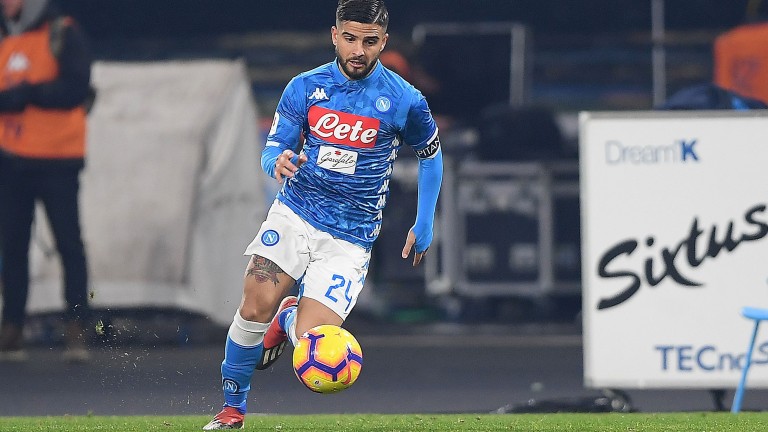 Italian teams have a poor recent record in the Europa League and its predecessor the Uefa Cup, with no finalists since Parma's 3-0 victory over Marseille in 1999, but Napoli can buck the trend by lifting the famous trophy for the second time.

Napoli manager Carlo Ancelotti has won major trophies at each of his last five clubs – Milan, Chelsea, Paris St-Germain, Real Madrid and Bayern Munich – and his thirst for silverware is undiminished.

His only realistic chance of collecting a medal this season is in the Europa League and there is no reason why he shouldn't commit fully to trying to win the competition, starting with their last-32 clash against Swiss outfit Zurich.

Napoli face an almost impossible task in the Serie A title race with nine points separating them from leaders Juventus, but they are comfortably inside the Champions League qualification places and 13 points ahead of fourth-placed Milan.

They got used to playing two big games per week during the Champions League group stage and managed their workload well enough.

Ancelotti's side stayed consistent in the league and competed well in a tough Champions League section, finishing two points behind PSG with as many points as Liverpool, who went through on goals scored.

Napoli were the strongest of the teams to miss out on the Champions League last 16 but the Europa League offers a massive opportunity for them to claim a consolation prize.

They have excellent attacking options with Arkadiusz Milik, Lorenzo Insigne and Dries Mertens all possessing matchwinning qualities and they look the team to beat.

Chelsea and Arsenal are the market leaders at 4-1 and 6-1 and there is an obvious incentive for them to take the competition seriously, given the difficulties they are having in nailing down a top-four spot in the Premier League.

But their struggles for consistency should be a warning sign for anyone considering backing them at such short odds.

Maurizio Sarri's future at Chelsea is in doubt in the wake of his team's 6-0 defeat at Manchester City.

Winning the Europa League might be enough to extend Sarri's Stamford Bridge stay beyond a single season but to do that his team will have to perform better in tough away games.

The Blues have played away to three big-six rivals in the Premier League and they were dreadful on each occasion, losing 3-1 at Tottenham, 2-0 at Arsenal and 6-0 at City.

In the Europa League knockout stage they begin with a gentle tie against Malmo but further along the line they are going to run into some bigger teams and that is when their weaknesses could be exposed.

Arsenal look a more committed bunch than Chelsea but they do not possess the same quality.

Strikers Pierre-Emerick Aubameyang and Alexandre Lacazette are obvious goal threats but the rest of the team lacks class and the ongoing stand-off between Mesut Ozil and Unai Emery is holding them back.

They cruised through a soft group and should have no problems seeing off Bate Borisov but they could be found wanting when tougher challengers come along.

Celtic did well to come through the group stage, finishing above Bundesliga side Leipzig, but their chances of a long run look slim.

The Bhoys are dominant in Scotland but they haven't reached a European quarter-final since the 2003-2004 Uefa Cup.

Sevilla are the most successful team in the competition's history and they get the shortest quote of the Spanish sides at 12-1.

They have lifted the trophy five times, three of them in the last five years.

However, they have landed a tough draw against Lazio and are going through a sharp downturn in results.

Their title hopes have disappeared after one win in their last seven La Liga games and they were bundled out of the Copa del Rey by Barcelona, who defeated them 6-1 in the quarter-final second leg at Camp Nou.

Valencia are six points behind Sevilla in La Liga and they played well enough in the Champions League, collecting four points from six against Manchester United, but their lack of star quality in attack is a concern.

Los Che average 1.04 goals per game in La Liga and have drawn 13 of their 23 league games.

Inter were among the big fish to slip through the Champions League net, falling victim to Tottenham's late equaliser at Barcelona on matchday six, and they have the potential to go deep in a much weaker competition.

Inter have plenty of individual quality but their battle to secure a top-three finish in Serie A could prove to be a major distraction.

There is plenty of depth to the competition and 33-1 shots Leverkusen look the team most likely to go well at a big price.

Peter Bosz's side have gone up a notch since the winter break and are up to sixth in the Bundesliga after winning their last three league games.

They were 3-1 winners at home to Bayern Munich last month and are an exciting team to watch with rising stars Kai Havertz and Julian Brandt excelling in attack.

Relying on young talent means Leverkusen will have their off days but it also makes them dangerous opponents, capable of bringing down the best teams in the competition.

Eintracht Frankfurt are level on points with Leverkusen and deserve a lot of credit after maintaining a 100 per cent record in the group stage.

However, they have won just two of their last nine games in the Bundesliga and their recent dip in performance is a concern going into a tough tie against Shakhtar Donetsk.

Real Betis and Villarreal complete the Spanish challenge with both available at 33-1. Betis, seventh in La Liga, look a more attractive each-way option than Villarreal, who are in the thick of a relegation battle.

Salzburg were semi-finalists last season and are going strong again having collected maximum points in Group B.

However, the Austrian side haven't played any competitive football for two months and that is slightly concerning as they prepare to take on Belgian highflyers Club Brugge.