Mellow Mancini prepared for Italy to live up to the hype 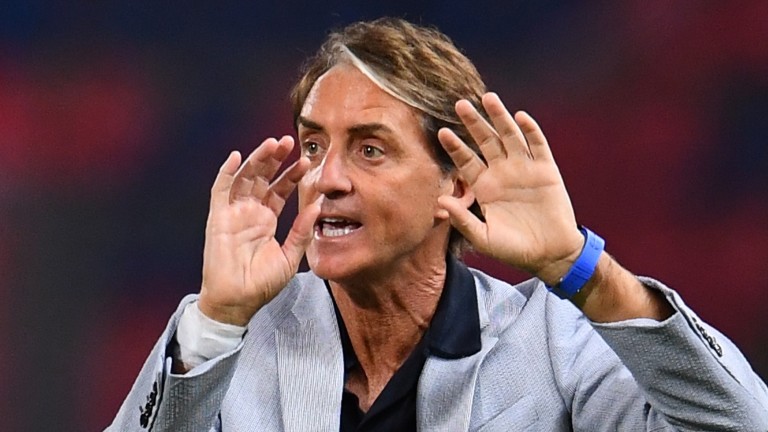 It has been a long five years. After failing to qualify for the World Cup in Russia and then having a 12-month delay for this tournament, Italian fans cannot wait to see their national team in action in a major finals.

And the fact the team is in such great form has heightened the excitement for Friday's game against Turkey, particularly as there has been no major-tournament football in Italy since 1990.

Everyone is optimistic and impatient to get on with it and that has been a bit unusual.

People are realising that they have gone on a 27-game unbeaten run and while some of the opposition has not been great, they have still beaten teams such as Poland and the Netherlands and that has definitely heightened the sense of anticipation.

It’s been a great run under Roberto Mancini, who seems a different man from the one who guided Manchester City to their first Premier League title.

Whether it has been the national job or the years that have made him more mellow, it is hard to tell.

In 2008 when he was manager of Inter, they lost in the Champions League quarter-finals to Liverpool and he just announced, that’s it, I’m leaving at the end of the season.

It was a really impulsive reaction.

But he has always spoken so positively about this job over the last four or five years.

He has a sense that he has a right to wrong and it is a big regret that he never played in a World Cup as a player.

In 1986, a night out until 5am while on international duty in America cost him his place under Enzo Berzot, while in 1990 he was eclipsed by Toto Schillaci coming out of nowhere and in 1994 he had a row with Arrigo Saachi when he struggled being second-choice to Roberto Baggio

So he’s got one eye on Qatar but this is a great tournament for him too.

As for Friday's opening match, it has just come too early for Marco Verratti, but they are confident the PSG man will be available for the game against Switzerland on Wednesday.

But Mancini has been shrewd enough to prepare for these sorts of problems and it is not as if any replacements will be going into action raw.

There will be a great deal of confidence that the right type of players will step in.

Manuel Locatelli may not be quite as combative as Verratti but he’s had a great season at Sassuolo.

He has seen plenty of action and Mancini has swapped things around so that no one will be unfamiliar with things if they get the chance to start.

It won’t be like for like when Locatelli comes in but he is very comfortable on the ball and has excellent distribution skills.

One of the biggest questions is whether Ciro Immobile can replicate the form he shows for Lazio up front and there are many doubters.

But this is a team who scored 37 goals in their ten qualification matches and Lorenzo Insigne is excellent off the flank.

There is a broad range of goalscoring ability in the squad so it may not be a huge issue if he is off colour.

However, they are going to have to be at their best.

Turkey is going to be the toughest group game and I think they have the capability to go quite far in the tournament.

The Lille contingent will need to be handled and it is interesting that they could all be attacking from the right flank.

Zeki Celik is at right-back, Yusuf Yazici in front of him and Burak Yilmaz will be a handful up front.

He can have a great tournament even if he is 35 and that will mean there is a lot of pressure on Leonardo Spinazzola at left back. That’s where I imagine the danger will come from.

They will be full of confidence after winning the French title when they were not expected to so they cannot afford to be taken lightly.

Merin Demiral had a strong season alongside Giorgio Chiellini at Juventus so they have good players. Hakan Calhanoglu was good at Milan too so there will be plenty of familiar talent

I’m getting increasingly nervous even though I’ve spent months telling people how good this Italy team are, but this is a team who go against the stereotype.

It is far too easy for people to say they will be defensive, yet they are anything but.

They showed in the friendly against the Czech Republic the other day that, if they get in front, they will keep on pushing.

But I would still anticipate a narrow win, even if an early Italy goal could change the complexion of the match.

The long wait is over and results mean the hype is big.

Now is the time to live up to it.

FIRST PUBLISHED 4:30PM, JUN 10 2021
Mancini has been shrewd enough to prepare for these sorts of problems and it is not as if any replacements will be going into action raw.