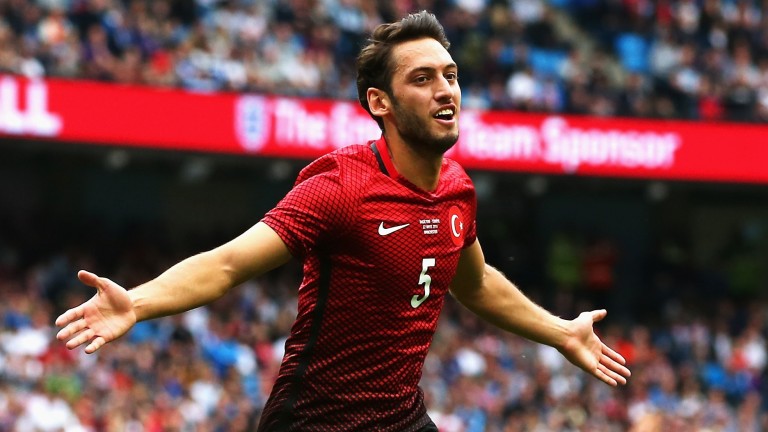 Hakan Calhanoglu is part of an entertaining Turkey side
Alex Livesey
1 of 1
By James Milton 9:08AM, JUN 13 2021

Some teams come into a tournament finals with the sole objective of lifting the trophy while for others qualifying for the knockout stages represents a successful campaign.

Down at the bottom of the outright market, however, picking up a single point or even just scoring a goal is the aim of the game and the betting on who will be the lowest-scoring team is an interesting heat.

Hungary are predictably short given their brutal draw against France, Portugal and Germany while North Macedonia are also expected to struggle, despite their shock 2-1 win over the Germans in World Cup qualifying in March.

Finland are big runners in the market although they have a proven international goalscorer in Norwich's Teemu Pukki and could land a blow on a ropey Russian defence in Group B.

Scotland and Wales have based their recent success on mean defences rather than expansive attacking football but at the prices Slovakia are worth backing to finish bottom of the scoring charts.

They are hot favourites to finish bottom of Group E in which they face solid Sweden and Poland sides as well as group favourites Spain.

Slovakia qualified through the playoffs but they scored only one goal inside 90 minutes as they beat Ireland on penalties and Northern Ireland in extra-time.

They beat Russia 2-1 in their last World Cup qualifier in March but started their campaign with a 0-0 draw in Cyprus, having scored just five times in six Nations League games against Scotland, Israel and the Czech Republic.

With France, Germany and Portugal playing each other in the group stage, England, Spain, Belgium and the Netherlands head the betting to be the highest-scoring team in the tournament.

Much of the damage should be done in the group stage, although it is worth noting that France racked up 11 goals in four knockout games on their way to World Cup glory in Russia.

It may be worth taking a flyer on Turkey at 100-1 in this market. They are around half that price to win the tournament and their recent defensive record suggests they are not going to grind their way to victory.

Veteran striker Burak Yilmaz had a glorious Ligue 1 season for surprise champions Lille and he kicked off Turkey's 2022 World Cup qualifying campaign with a hat-trick in the 4-2 win over the Netherlands.

They followed that up with a 3-0 win over Norway and a 3-3 draw with Latvia, having also shared 3-3 friendly draws with Germany and Croatia last autumn and beaten Russia 3-2 in the Nations League.

Milan's Hakan Calhanoglu, Leicester's Cengiz Under and Ozan Tufan of Fenerbahce provide goals from midfield and the Turks pose an aerial threat from set pieces through defenders Caglar Soynucu and Kaan Ayhan and striker Kenan Karaman.

Unfortunately the market is win only – bookmakers aren't charities – but the 100-1 pokes could outrun their odds.

Memphis Depay is in demand this summer as his contract with Lyon expires and the Netherlands forward can showcase his quality at Euro 2020.

Depay scored 22 goals in 36 Ligue 1 and Coupe de France starts this term and took his international tally to 23 with a brace in March's World Cup qualifier against Gibraltar.

Tougher tests await him at the finals but he should get plenty of chances against Group C rivals Ukraine, Austria and North Macedonia and is likely to be on penalty and free-kick duty for the Dutch.

Injury ended Zlatan Ibrahimovic's hopes of playing for Sweden at the finals but not before he set up Alexander Isak for his sixth international goal in a World Cup qualifying win over Kosovo in March.

With Zlatan sidelined, the 21-year-old Isak could steal the show for the Swedes after a stellar season for Real Sociedad in La Liga.

Only Lionel Messi, Gerard Moreno, Karim Benzema, Luis Suarez and Sevilla's Youssef En-Nesyri scored more goals than Isak's 17 in 34 top-flight appearances and he could make his mark in his first tournament finals.

FIRST PUBLISHED 2:56PM, JUN 10 2021
Slovakia qualified through the playoffs, scoring only one goal inside 90 minutes as they beat Ireland on penalties and Northern Ireland in extra-time