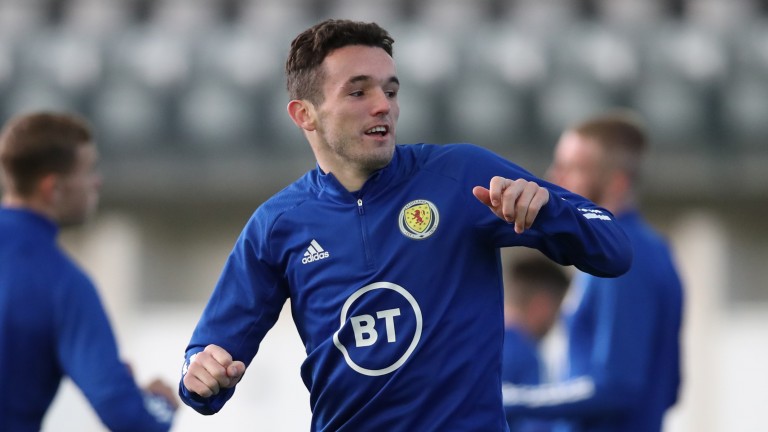 John McGinn has been in prolific goalscoring form for Scotland
Ian MacNicol
1 of 1
By James Milton UPDATED 9:46AM, NOV 19 2019

Scotland
Injured striker Lawrence Shankland has been replaced by Eamonn Brophy. Andy Robertson, Scott McTominay and Ryan Fraser were ruled out before the trip to Cyprus.

Kazakhstan
Yan Vorogovskiy is doubtful after going off injured in the win over San Marino.

Scotland's chances of automatic qualification for Euro 2020 disappeared a long time ago but they are aiming to finish their Group I campaign on a high as they build towards the playoffs in March.

A 6-0 home win over San Marino and a 2-1 victory in Cyprus are unlikely to have the rest of Europe quaking in their boots but those were much-needed successes given Steve Clarke's tough start to the national-team job.

The former West Brom and Kilmarnock boss needed an 89th-minute goal from Oliver Burke to nick a 2-1 home win over the Cypriots in his first game in charge before overseeing home and away defeats to both Belgium and Russia.

The last of those losses, a dismal 4-0 reverse away to Russia, was particularly galling for Clarke but his side are hot favourites to make it three straight wins at home to Kazakhstan in their group finale.

It is a dead rubber in terms of qualification but Clarke will want to see his players maintain their intensity nonetheless and the Tartan Army will demand revenge for March's inglorious 3-0 defeat in the reverse fixture in Astana.

Alex McLeish's side put in a woeful performance that day, going 2-0 down inside ten minutes against a Kazakh side who had won only one of their previous 20 qualifying matches.

Professional pride would suggest the Scots should produce a better display at Hampden Park despite the absence through injury of skipper Andy Robertson.

The Liverpool left-back is not the only Scot enjoying a fine season in the Premier League and Aston Villa's John McGinn looks a nice price to continue his fine goalscoring form.

The midfielder notched a first-half hat-trick against San Marino in Scotland's last home game, opened the scoring at home to Russia and claimed the winner away to Cyprus on Saturday.

McGinn has already scored against Tottenham, Arsenal and Burnley in his first English top-flight campaign and he is worth an interest to break the deadlock.

Both teams have scored in eight of Kazakhstan's last ten away internationals.