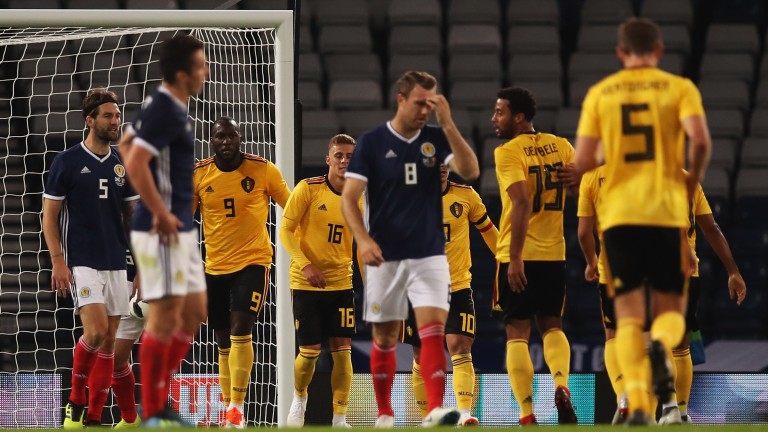 According to Fifa's rankings there is no tougher test than a trip to Belgium and Scotland are likely to come up short in their bid to upset the form book in Brussels.

Belgium, ranked number one, finished third in the World Cup and are already racing through this European Championship campaign with three straight victories.

Russia, Cyprus and, most recently, Kazakhstan have all been defeated by at least a two-goal margin and Roberto Martinez's men are red-hot favourites to move a step closer to securing a spot at Euro 2020.

Few teams on the international scene can match Belgium's attacking quality and Scotland would not be the first side to come up short in attempting to nullify the often rampant Red Devils.

In terms of a bet Romelu Lukaku could offer each-way value for first-goalscorer backers in a match where goals are anticipated.

Lukaku is often seen as a flat-track bully, which isn't a problem on this occasion given the weakness of the opposition, and the Manchester United man blew off the cobwebs with a goal in Saturday's 3-0 stroll over Kazakhstan.

It has been suggested that Lukaku is surplus to requirements at Old Trafford and if that is true this outing offers him a chance to give potential suitors a nudge just in time for a summer transfer.

Lukaku may be unloved in Manchester, but he has been a regular scorer for Belgium, notching 46 times in 80 internationals. That record compares favourably with the other members of the front three - Eden Hazard (30 goals in 101 caps) and Dries Mertens (17/84).

Only Cristiano Ronaldo and Robert Lewandowski outscored Lukaku in World Cup qualifying, while he was joint-second in the Golden Boot race in Russia, behind Harry Kane.

Lukaku also has six goals in his last five internationals, a run started in a 4-0 friendly success away to Scotland.

Scotland will be hoping the more competitive nature of this match will enable them to ruffle Red Devil feathers, although Hazard and De Bruyne are world-class operators who should dominate the visitors.

Steve Clarke is saying all the right things and his arrival as manager seems to have lifted morale. That said, they only just beat Cyprus 2-1 at Hampden on Saturday thanks to  substitute Oliver Burke's last-gasp goal.

The Tartan Army have watched their side surrender in Kazakhstan to a pathetic 3-0 defeat and struggle past San Marino before only just overcoming Cyprus.

That level of performance points to a heavy beating in Brussels.

Key stat
Belgium have been leading at half-time in eight of their last ten matches.