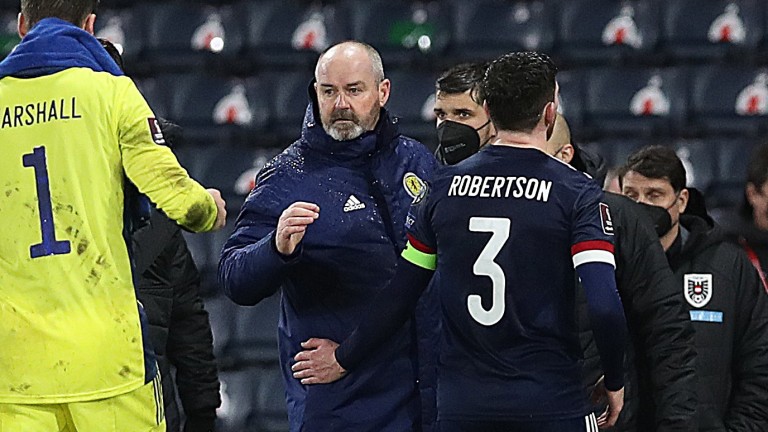 All eyes will be on Wembley on June 18 for the big one, the first meeting of Scotland and England at a major finals since 1996, and while most will be expecting Gareth Southgate’s boys to win, I wouldn’t write us off.

Scotland are going into the Euros on a massive high given the manner in which we qualified and given the strides being made under Steve Clarke.

And there’s nothing like a game against England to eke a little bit more fight and fire out of a Scot.

Football and racing are my two big loves. I spent ten years of my career in the north-west with Blackpool, Liverpool and Stoke and I fondly remember Friday night meetings at Haydock or days out at Chester.

My daughter’s riding now and doing well at it. I’ll help with the mucking out (and paying the bills!) because I just love being around horses, and always have. I’ve owned racehorses before but I’d rather enjoy the experience, it’s one of the best days out you can have.

But racing will be taking a back seat over the next few days as Scotland get to grips with trying to get themselves out of Group D and I’m absolutely convinced they can do it.

You cannot argue with the decisions Steve Clarke has made. He has got his squad selection spot on. Bringing in the three youngsters – Patterson, Turnbull and Gilmour – has rejuvenated the squad. It’s obviously good for them but also a reminder to the experienced boys that there are some talented youngsters hot on their heels.

Steve has to play a 3-5-2 because he has to get his two best players into the team which means Kieren Tierney will play on the left side of a three-man defence and Andy Robertson at left wing-back.

I also think he will play two up front rather than a lone striker because that allows us to play to our strengths. We’ll need to get out, and having two up top is the way to do so. Lyndon Dykes can hold the ball up and Che Adams will put a shift in and get round the back.

We’ll need to keep clean sheets and there are question marks over who will score the goals but the bottom line is I can see no reason why Scotland shouldn’t qualify. In fact, they will qualify.

It’s a tough group – England are everyone’s favourites to win the group and Croatia are clearly talented as are the Czechs but let’s not forget we are playing those two at home and that counts for something.

England are good and can be very good on their day but I’m confident we can win the fight to either finish second or as one of the best third-placed teams. I would expect us to get four points from our two matches at Hampden and that should be enough to get us into the last 16.

And there’s one other thing we haven’t mentioned, of course, and that’s expectation. We’re under none whereas England are, as usual, under loads and there are no guarantees how they will respond.

Reaching the semi-finals at the World Cup three years ago has heightened expectations massively, but with expectation comes pressure. How many golden generations have England produced over the years, and all of them failed. Is this going to be another of those?

Yes, playing at home is a plus, but it comes with pressure and imagine the outcry, especially in the media, if they fail to beat Croatia in the opener. Suddenly you’re looking at a crisis.

And of course the England lads won’t be able to get away from it. When you’re on foreign soil you can distance yourself from all the noise but camped up in St George’s Park they’ll be well aware of any negativity.

They won’t want to be taking on Scotland under pressure – the fixture itself provides enough of that.

I only ever had the good fortune of being involved in one back in 2013, a 3-2 loss at Wembley. I was on the bench but it was still an incredible occasion because it means so much to both sets of fans and players.

You want to win football matches for your country and you certainly want to beat the auld enemy.

It’s a match that conjures up so many great memories; Jim Baxter’s keepy-uppies, Kenny Dalglish’s goal through Ray Clemence’s legs, Euro 96, Don Hutchison’s winner three years later, the list goes on and on. And all those moments seem to mean more because it’s a fixture that just seems to mean more.

We will not make it easy for England that’s for sure. Hopefully we’ll be heading to Wembley on a high and then who knows what will happen?

France are a fantastic side and I think Kylian Mbappe will inspire them to Euro 2020 glory.

I do like the look of England and one or two others, and home advantage is definitely a bonus for Gareth Southgate's side, but I think France are on another level.

Their squad is packed with world-class stars and no one is more impressive than Mbappe, who is an absolute machine.

I also think he will become even better if he leaves Paris Saint-Germain, which surely he has to do soon. It looks like Manchester City are going to get Harry Kane which rules them out.

But if I was the Liverpool owners I'd be looking to break the bank to get him at Anfield. He would turn the Reds from a top-four Premier League team into Champions League winners.

FIRST PUBLISHED 2:56PM, JUN 10 2021
Scotland are going into the Euros on a massive high given the manner in which we qualified and given the strides being made under Steve Clarke