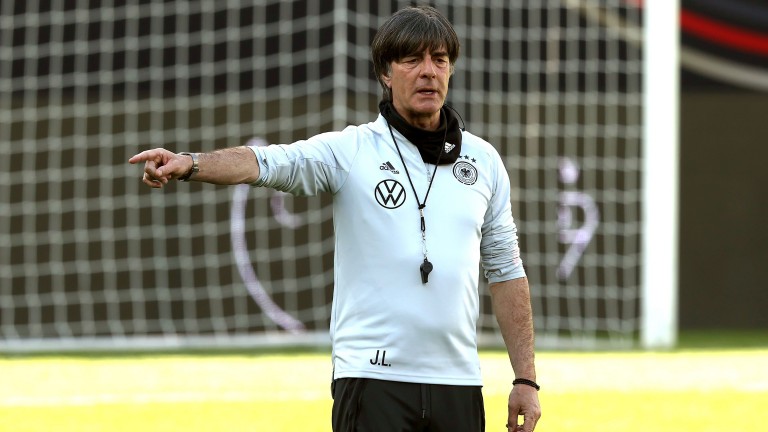 Turkey to win Group A
6-1 Boylesports

It pains me to say it but the bottom line is that the German side heading to the Euro 2020 finals quite simply lack class required to win the tournament.

They don’t look like a 9-1 chance to lift the trophy and they shouldn’t be favourites to win Group F – a section where they are inferior to two of their opponents, France and Portugal.

Portugal and Belgium are the two teams that I fancy this summer and I’m afraid Germany are a long way from that shortlist. The only bet I can think of to consider regarding Joachim Low’s men is to lay them to win their group.

I’ve said before that Low has outstayed his welcome – he should have left after the 2018 World Cup debacle but was tied down by a lengthy contract ludicrously handed to him even before those finals.

We’ve endure a hammering by Spain, a defeat to North Macedonia and the confusion over recalls for Thomas Muller and Mats Hummels, who should never have been axed in the first place. But I know that some of the senior players in the squad weren’t happy with Muller and Hummels coming back so it will be interesting to see how that plays out. Personally, I think they both help Germany’s cause.

The future should be brighter post-Low under Hansi Flick – no one else would have pulled off what he did at Bayern Munich – but there is discord in the federation as well so these are troubling times.

More immediately, Low has to get the right people in his team, building it around Leon Goretzka, playing Josh Kimmich at right-back and having Kai Havertz up top. This is not a great Germany team and one that doesn’t look like sticking three, four or five goals past teams like before. The aura has long gone.

They’ll qualify because victory over Hungary will ensure that but I prefer Portugal in the group and reckon they have an outstanding claim to winning the whole thing at a nice price.
The defending champions still look to Cristiano Ronaldo for

inspiration but their support cast is probably better than it was five years ago with their supply line of Bernardo Silva, Bruno Fernandes and Diogo Jota as gifted as anything at the finals.

And at the back the exceptional Ruben Dias and Joao Cancelo are coming off fantastic seasons with Manchester City. They could be better than they were five years ago.

Belgium have to be massive runners with Kevin De Bruyne playing the best football of his career. I love Youri Tielemans in a role I know well and if Eden Hazard is fit to support a frontline full of goals, Belgium are also going to be a danger.

There’s a lot to like about England who will be one of the more exciting sides at the Euros this summer, but I think they’re too young to win the tournament.

And they certainly aren’t helped by having a keeper in Jordan Pickford who can be a real liability.

I like calmness and assuredness in my goalkeepers – and Pickford is neither of those and at this level with all the pressure that comes in big games, that could easily become a problem.

Also, John Stones has won plaudits galore this season and I do like him. But it’s not hard to look good playing alongside someone as good as Ruben Dias and in a Manchester City team who dominate possession, just mopping up the odd long ball and then knocking passes around.

His chemistry alongside Harry Maguire in an England shirt is different and England are guilty of offering up careless chances.

With three games at Wembley England should win their group but are going to be running into France, Portugal or Germany in round two, then maybe Spain if they get through that. International experience is important and I do wonder if Gareth Southgate has enough in the group to overcome tests like those.

It is no great surprise to see Harry Kane at the top of the Golden Boot betting but in a market which may only need four goals to win it, I’d be looking further down the book for some value.

I’d also be looking at players from two countries who are going to go deep which brings me to Belgium and Portugal.

Kevin De Bruyne is a huge price at 80-1. He will be on free-kicks, he is a constant threat from around the edge of the box and he’s playing in a group with Denmark, Finland and Russia where there could well be goals.

Portugal are always a lively bunch going forward and one player who has caught the eye over the last season or so is Diogo Jota, who looks a real finisher. Thirteen goals in an injury-hit campaign for Liverpool is a decent return and he also scored three times for Portugal in March.

One group favourite I can’t have at the prices is Italy in Group A.

Yes, home advantage is of course a help but people are getting carried away by their form under Roberto Mancini.

Their qualifying group lacked any real substance and three 2-0 wins over Northern Ireland, Bulgaria and Lithuania in World Cup qualifying tells us nothing. I just think they’re overrated.

Is there really much class alongside Marco Verratti? Has Ciro Immobile ever looked like a proven international goalscorer? Will their ageing defence stand firm? Their are too many question marks for me.

The amount of travelling Switzerland have to do puts me off them but I reckon Turkey will beat Italy first up and could well take top spot.

Two jollies who I would put up, however, are Belgium and the Netherlands. The Low Countries group win double works out at 6-4.

FIRST PUBLISHED 2:56PM, JUN 10 2021
Portugal and Belgium are the two teams that I fancy this summer and I’m afraid Germany are a long way from that shortlist